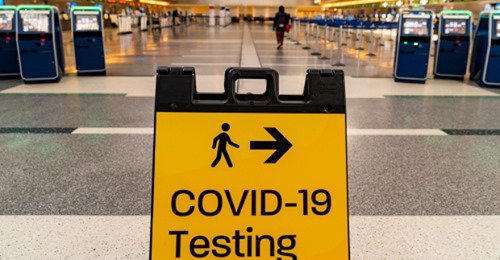 OTTAWA -- The federal government says it plans to require air travellers to test negative for COVID-19 before landing in Canada in response to concerns that people vacationing abroad could bring the novel coronavirus home with them.

Cabinet ministers met Wednesday morning following criticism from the premiers of Canada's two largest provinces that federal efforts at the border were too loose.

The new federal measure comes as Ontario's finance minister finds himself in hot water over travelling out of the country despite Canadians being asked to avoid such trips.

Intergovernmental Affairs Minister Dominic LeBlanc said all passengers on flights entering Canada will soon be required to have a negative PCR test three days before their arrival.

Newsletter sign-up: Get The COVID-19 Brief sent to your inbox
PCR tests are designed to detect minute amounts of the virus that causes COVID-19, usually through a swab up the nose or in the mouth.

It wasn't immediately clear when the new requirement will be put in place, with LeBlanc saying more information would follow in the coming days.

It does not appear to apply to anyone crossing by car into Canada through a border point with the United States.

“Right now, the greatest concern that we have heard among Canadians is the impact of international travel at our airports,” Blair said.

Several other countries, including the U.S., have implemented a negative test requirement for incoming passengers. The identification of new strains of COVID-19 in the U.K. and South Africa has only heightened concerns about cross-border spread of the virus.

The government had months to implement a similar system in Canada, but instead rolled out a haphazard announcement in response to headlines, said Conservative health critic Michelle Rempel.

“Our MP offices have already been receiving inquiries this morning from panicked travellers abroad on this new requirement,” she said in a statement Wednesday.

“Justin Trudeau has had months to get his act together on this front, and today's detail-free announcement is irresponsible.”

Blair noted the government cannot prevent Canadians from coming home, but the law does require travellers to quarantine for 14 days after arrival.

Returning Canadians have a moral and legal obligation to quarantine to protect their families, friends and communities, Blair said, signalling that this applies even to politicians who have fled the snow for a sunny beach.

Ontario set a new daily record for cases Wednesday with 2,923. Just over one-third of these emerged in the country's largest city of Toronto. Neighbouring Quebec reported 2,511 new cases of COVID-19 and 41 more deaths.

Earlier today, the U.K. became the first country to authorize use of the COVID-19 vaccine created by AstraZeneca and Oxford University.

Health Canada says it needs more information before it can make a decision on the vaccine. The agency says in a statement that it is working with international counterparts like those in the U.K. to share information on vaccines under review.

Health Canada says it cannot provide a definite timeline for completion of its review of the vaccine.ctvnews