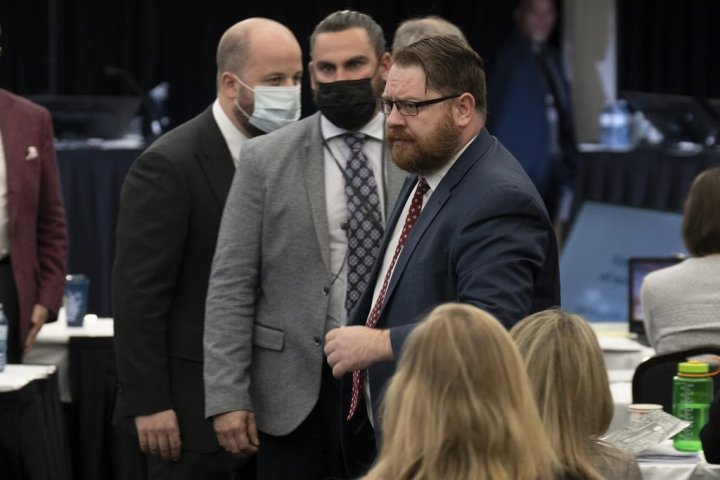 A lawyer representing the “Freedom Convoy” organizers is facing a cease-and-desist letter as well as a “forthcoming” notice of libel after allegations he made during the Emergencies Act inquiry on Monday.

Brendan Miller, the counsel representing Freedom Corp., had claimed during comments made at the commission that an employee of the government relations firm Enterprise Canada, Brian Fox, was carrying a Nazi flag during the protests earlier this year.

In a cease and desist letter sent to Miller and published on Enterprise Canada’s Twitter on Tuesday, lawyer Jeff Galway from Blakes, Cassels and Graydon said the “unfounded accusation” is “highly defamatory.”

“It is irresponsible and reckless to use the Commission’s process to make these false and damaging allegations in a highly visible forum,” the letter said.

“These accusations could not be more baseless, and are causing immediate and irreparable harm to our clients.”

Miller levied the accusation on Monday while questioning the head of Canada’s spy agency, David Vigneault, during a hearing for the Public Order Emergencies Commission.

Miller had alleged that the Enterprise employee had been carrying a Nazi flag during the convoy.

The commissioner then cut in and chastised Miller’s conduct, saying the question was “not a fair statement.”

In the cease and desist sent to Miller on Tuesday, Galway explained that Fox “was not in Ottawa at any time in January or February of 2021.”

“His most recent visit to Ottawa, to the best of his recollection, was to attend the Manning conservative action conference in 2019,” it added.

The letter went on to say that Fox was “not involved” in the “Freedom Convoy” protests and added that, “contrary to the misinformation (Miller’s) statements have engendered online, Brian Fox is not a Liberal Party member, supporter, or collaborator.”

“He is a longstanding member of and contributor to the Conservative Party of Canada, and participated in the recent leadership process to support Mr. (Pierre) Poilievre,” it said.

“Your implication that Mr. Fox colluded with the incumbent government to discredit protestors has absolutely no basis in fact, and is reckless.”

Shortly after Miller made the allegation, social media lit up with claims about the Enterprise employee. Some users on Twitter called him a “paid actor,” while others questioned whether he was a “Liberal plant.”

The letter concludes by demanding Miller “cease and desist immediately” and “correct” his “false statements.”

“A formal notice of libel is forthcoming, and we expressly reserve all of our clients’ legal rights and remedies.”

Speaking outside the inquiry on Tuesday prior to the cease and desist being made public, Miller faced questions from reporters asking whether he was concerned about being sued for the allegation he made.

“No, I’m not. Because guess what? Truth is a full defence,” Miller responded.

“We also have privileges for things of which we say in a courtroom — and the reason that that exists is so that lawyers can do their job and witnesses can tell the truth.”

He said he didn’t care about Enterprise’s “little announcement yesterday,” referring to the government relation firm’s statement that they were considering their legal options.

“I could care less,” Miller said.

“If they want to bring that, I would be happy to do so and defend it, and get discovery, and get their records.”

Miller proceeded to reiterate the assertion during his questioning of Public Safety Minister Marco Mendicino on Tuesday afternoon, after receiving the cease and desist.

The Freedom Corp. lawyer also told the inquiry he had filed an “affidavit” from an individual “who identified this man, and the man is Mr. Brian Fox, according to that affidavit.”