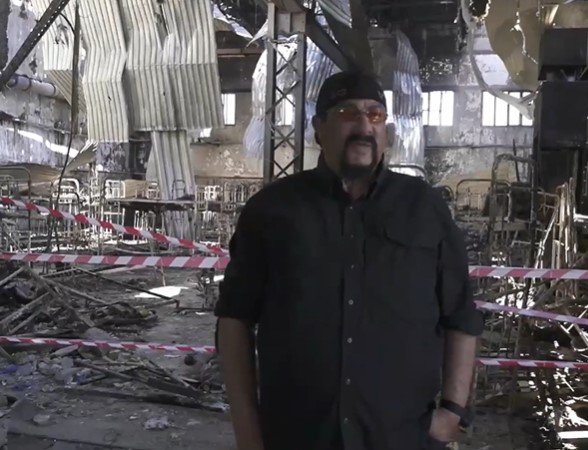 Footage shared by Russian state media shows the 70-year-old actor standing in what appears to be the wreckage of a building identified as Ukraine’s Olenivka prison in Donetsk, reports Insider.

In late July, more than 50 Ukrainian prisoners of war were killed in the facility in disputed circumstances.

In the video, however, Seagal claims U.S.-supplied HIMARS rockets, fired by Ukrainian troops, were the cause of the blast.

“This is where HIMARS hit, 50 people were killed, another 70 were injured,” Seagal said in the video posted to the pro-Kremlin news site TVZVEZDA on Tuesday.

“It definitely looks like a rocket. If you look at the burning and other details, of course, it’s not a bomb. Not to mention the fact that Russia really has a lot of artifacts from HIMARS.”

In the video, the Under Siege star is identified as a special representative of the Ministry of Foreign Affairs of the Russian Federation for humanitarian relations between Russia and the U.S.

Since the prison’s destruction, Russia and Ukraine have been attempting to cast blame on each other for the attack.

In the video, an English-speaking Seagal claims Ukrainian President Volodymyr Zelenskyy ordered the shelling to silence a “Nazi” being held at the prison.

“The interesting thing is that one of the killed Nazis is a Nazi who just started talking a lot about Zelenskyy,” Seagal added, “and that Zelenskyy is responsible for the orders about torture and other atrocities that violate not only the Geneva War Convention, but are also crimes against humanity.”

Zelenskyy has been adamant that the attack was a “Russian war crime” and has accused Moscow of shelling the prison to cover up the murder and torture of prisoners of war.

Seagal, who has Russian heritage, has become increasingly tied to Russia over the years. In 2016, he was awarded a Russian passport from President Vladimir Putin. And in 2021 the self-styled musician officially joined a political coalition backing Putin, in an effort to adopt Russia as his home.

In 2017, Ukraine took the step of banning the Above the Law actor from their country, labelling him a threat to national security.

The country defended the ban at the time, saying it was warranted for people like Seagal who “committed socially dangerous actions… that contradict the interests of maintaining Ukraine’s security.”

Seagal rose to fame in the late 1980s and early ’90s as the star of many action films. He bonded with Putin over their mutual love of martial arts and Putin has often praised Seagal in public.

He faced a slew of allegations of sexual misconduct in 2018, amid a broader #MeToo reckoning in Hollywood. The Los Angeles district attorney’s office ultimately dismissed two potential cases against him later that year, after determining that the statute of limitations had expired in both instances.