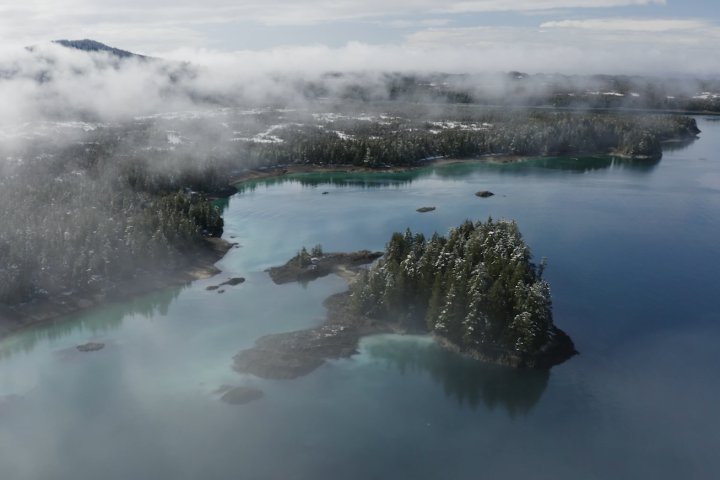 The Kitasoo Xai’xais Nation has declared its own Marine Protected Area along a critical and biodiverse portion of British Columbia’s central coast.

It’s a spiritual place to the nation, whose livelihood, health and culture are intertwined with the land, water, fish and wildlife, according to Chief Doug Neasloss. The bay is also part of the Great Bear Sea, whose waters hug the largest coastal temperate rainforest on the planet.

“This bay that we’re talking about, Kitasu Bay, is basically the breadbasket for the community and it’s been that for thousands of years,” Neasloss explained.

“It’s basically one of the last spawning areas on the coast that’s reliable and extremely important to the community.”

The Great Bear Sea and Gitdisdzu Lugyeks are home to wild salmon, cod, halibut, shellfish, kelp forests, and more. Seabirds, seals and whales are among the mammals that frequent its dark and misty waters.

A Marine Protected Area or MPA is a legally-protected part of the ocean, managed to achieve long-term conservation goals.  As of 2020, Fisheries and Oceans Canada (DFO) had listed 14 in Canada, including B.C.’s Hecate Strait and Queen Charlotte Sound Glass Sponge Reefs.

Rather than federal law, the Gitdisdzu Lugyeks MPA was declared under Kitasoo Xai’xais law, Indigenous rights outlined in the Constitution Act and UN Declaration on the Rights of Indigenous Peoples.

DFO said no one was available to comment on this story by Global News’ deadline on Wednesday. The federal department’s goal is to conserve 25 per cent of Canadian marine and coastal areas by 2025, and 30 per cent by 2030.

Neasloss said the First Nation has worked with Ottawa for more than 15 years to protect water in its traditional territory, but it’s been a “frustrating” process. The federal government “pulled out” of negotiations twice, he added, including during deliberations over the controversial Enbridge Northern Gateway pipeline project.

“We just feel there’s not enough done in terms of marine protection on the whole B.C. coast,” he said.

“We’re open, we’re wanting to work with different levels of government and stakeholders, but we feel it was important that we have to make this step.”

Less than one per cent of water in Kitasoo Xai’xais territory is protected, even though much of the land is covered under agreements that protect the ecologically rare Great Bear Rainforest.

When the nation developed its land-use plans years ago, Neasloss said it tried to include the ocean, but was instructed to parse them as land is regulated by the provincial government, and water, the federal government.

“We’re an ocean-based people. We depend on the ocean for food, transportation, it connects all of our communities,” he told Global News.

“We have watched a long history of people just taking everything and not leaving anything. We feel that someone has to do something and we’re in the best position to do that.”

The management plan will be shared with all levels of government, reads the declaration signed June 21, and invites then to partner in implementation and co-governance in the spirit of reconciliation. It will also be open for public review and comment before it is finalized.

“We seek no permission,” it reads. “For decades we have worked with Canada and British Columbia to collaboratively form an MPA in Kitasu Bay.

“We will continue to encourage that outcome, however we can no long wait until other governments act to preserve and protect this special place that is integral to Kitasoo Xai’xais.”

The MPA will be enforced by the nation’s Guardian Watchmen, who this month, inked an agreement with the B.C. government to obtain all the authority of park rangers in provincial parks in their territory.