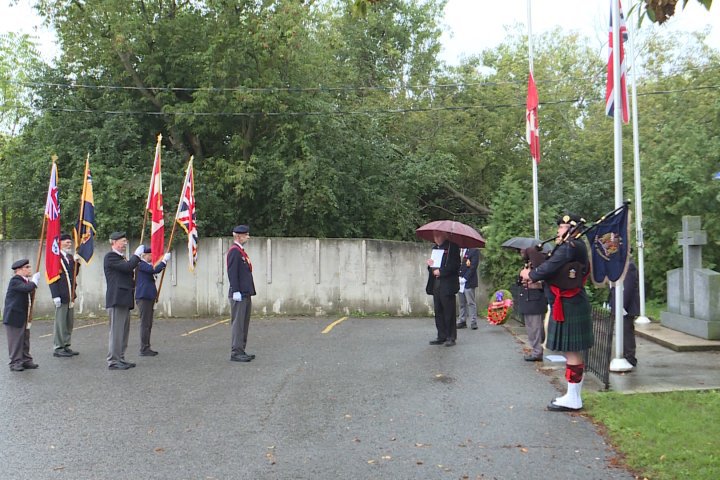 It was a solemn moment for the roughly 50 people who came out to Legion Branch 560 for the memorial service in remembrance of Queen Elizabeth II on the National Day of Mourning.

Branch 560 past president Allan Jones oversaw the ceremony and said the queen was much more than the Commonwealth’s longest-reigning monarch.

“She visited 110 countries in her lifetime, there was two assassination attempts that she survived,” said Jones. “The fact that she was the head of the Commonwealth of Nations that covers a third of the world’s population. I mean come on, there is no other ruler, no other monarch that comes anywhere near that.”

Following the service, participants placed poppies on the wreath set out in the monarch’s honour.

Lori Parish says she was surprised that she felt as emotional as she did at the service.

“It just feels like a bigger loss than some losses and it doesn’t seem fair to say because we’re all equal people, but some people have a bigger impact on the world and this was a big impact that she gave us so that’s why it feels like a big loss,” Parish said after the memorial’s conclusion.

Kingston and the Islands MPP Ted Hsu attended the morning service and says he’s astounded by the queen’s length of service in the public eye.

“As a politician you go to events, and you maybe go to event after event, imagine doing that for 70 years and trying to understand each of the groups that you are visiting and saying something that’s relevant and listening,” said Hsu.

For most Canadians, the queen is the only monarch they’ve ever known.

“I was only nine years old, and I watched it on TV. I was in awe of her at that time and I was still in awe all her life,” Johnstone said. “She lived and I lived the same time, you know, and I was in wonder over her life. She served the people and I’m amazed that she lived to 96 and was still serving the people the day before.”

Queen Elizabeth II was at Balmoral Castle in Scotland when she died on Sept. 8.