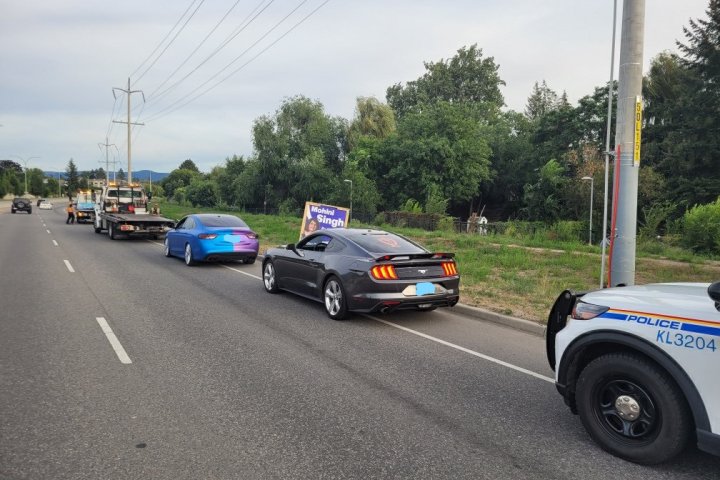 The drivers of two cars spotted racing along a Kelowna city street at double the speed limit are facing some hefty fines.

RCMP said it was on Saturday, just after 5 p.m., when two vehicles were spotted drag racing from the intersection northbound at Clement Avenue to Clifton Road.

The vehicles, a green 2019 Ford Mustang and a blue 2005 Chrysler 200 were clocked at speeds in excess of 120 kilometres an hour in a marked 60 km/hr zone, and they were passing other motorists, to boot, RCMP said.

“The vehicles came to a stop at the red light at Clifton Avenue, at which point the officer positioned his marked police car in front and directed the drivers to pull to the curb,” RCMP said in a press release.

“Both drivers admitted to the offence and received excessive speeding VT contrary to s.148(1).”

In turn, a $368 fine was dished out and both vehicles were impounded for seven days in accordance with the B.C. Motor Vehicle Act.

“These dangerous driving behaviours pose an extremely high risk, to not only the drivers of these vehicles, but also to innocent drivers and their occupants,” Sgt. Mark Booth of the Kelowna RCMP traffic service said.

“We take these incidents extremely seriously and therefore we hold these violators accountable, by removing their ability to continue these high-risk actions.”