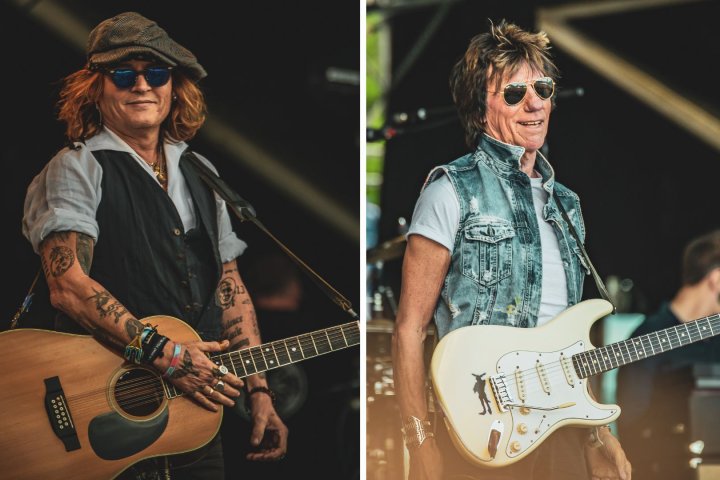 Johnny Depp and Jeff Beck have been accused of stealing an incarcerated man’s poem for the lyrics of their song Sad Motherf—kin’ Parade, the fourth track on their collaborative album, 18.

Rolling Stone first reported that the song appears to have many of the same phrases as the poem Hobo Ben by Slim Wilson, the pseudonym of a self-proclaimed “cheat” and “pimp” who spent time in prison for murder and armed robbery in 1960s.

A spokesperson for Depp and Beck told Rolling Stone they are assessing the validity of the claims regarding Sad Motherf—kin’ Parade.

“We are reviewing the inquiry relating to the song Sad Motherf—kin’ Parade on the 18 album by Jeff Beck and Johnny Depp. If appropriate, additional copyright credits will be added to all forms of the album,” the statement said.

Wilson, whose real identity is not known, met folklorist Bruce Jackson at the Missouri State Penitentiary in 1964. Wilson reportedly shared a number of poems and toasts — a form of historically Black poetry that tells heroic stories in an often comedic way — with Jackson.

In Jackson’s 1974 book about toasts, called Get Your Ass in the Water and Swim Like Me, he included many works attributed to Wilson. In 1976, Jackson recorded an album based on the book, on which Wilson performs several of the toasts.

The toast Hobo Ben describes the titular character at a party where he says, “Ladies of culture and beauty so refined, is there one among you that would grant me wine?/I’m raggedy I know, but I have no stink/and God bless the lady that’ll buy me a drink.’/Heavy-hipted Hattie turned to Nadine with a laugh/and said, ‘What that funky motherf—ker really need, child, is a bath.’”

The song Sad Motherf—kin’ Parade features many of the same lines. On the track, Depp says “I’m raggedy, I know, but I have no stink,” “God bless the lady that’ll buy me a drink,” and “what that funky motherf—ker really needs, child, is a bath.”

Depp and Beck are the only songwriters credited on the track.

“Everything else is from Slim’s performance in my book,” he continued. “I’ve never encountered anything like this. I’ve been publishing stuff for 50 years, and this is the first time anybody has just ripped something off and put his own name on it.”

Jackson’s son, Michael Lee Jackson (who is a lawyer), said they are looking at possibly pursuing legal action, though no such filing has been made.

“It’s just not plausible, in my opinion, that Johnny Depp or anybody else could have sat down and crafted those lyrics without almost wholly taking them from some version of my father’s recording and/or book where they appeared,” Michael told Rolling Stone.

Though Jackson owns the copyright to the recording of Hobo Ben, since Wilson told Jackson he learned the toast from his father (as most toasts are passed down orally), proving authorship may be difficult. (Jackson has never claimed to be the author of Hobo Ben and has historically shared profits with writers and performers like Wilson.)

For this reason, the accusations about Sad Motherf—kin’ Parade may prove to be more of an ethical dilemma than a legal one.

Jackson hopes Depp and Beck will change the songwriting credit to include Wilson.

“I don’t know if this record is selling. I’ve seen some reviews that I’d be very embarrassed to have gotten had they been my album,” he told Rolling Stone. “But if it is selling, Johnny Depp is making a lot of money on it. Should it go to him, or should it go to some place that helps the people who produced this culture?”