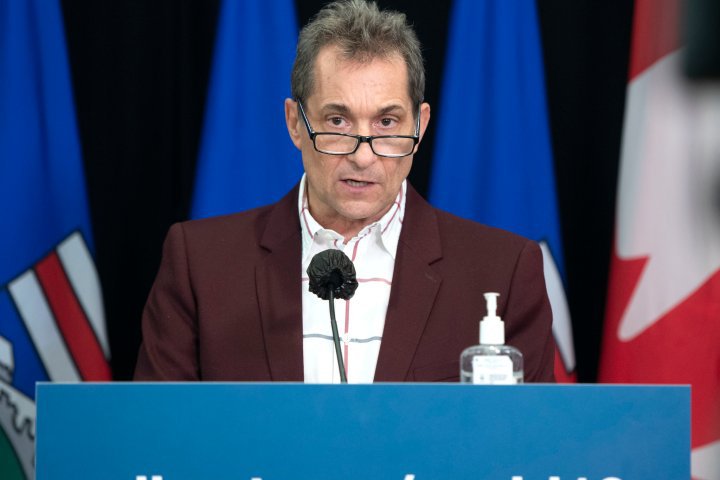 Premier Danielle Smith  has followed through on her pledge to remove Dr. Deena Hinshaw from her position as Alberta’s chief medical officer of health and is hiring a familiar face to replace her.

The Alberta government confirmed Monday afternoon that Dr. Mark Joffe, who has spoken to Albertans on numerous occasions during the COVID-19 pandemic at Alberta Health news conferences, will replace Hinshaw effective immediately.

Joffe’s biography page on the Alberta Health Services website says his “diverse clinical experience includes his specialty practice in infectious diseases.” The Calgary native has worked at the Royal Alexandra Hospital in Edmonton as well as at the Edmonton Sexually Transmitted Diseases Centre and the Edmonton Institution for Women.

Since becoming premier last month, Smith has said she would be replacing Hinshaw and finding new people to give her government advice on decisions related to public health.

Smith has previously indicated she believes Hinshaw and other public health leaders in the province did not provide the best advice for the province as the hospital system faced severe strain amid multiple waves of the COVID-19 pandemic.

Smith has been fiercely critical of how Alberta’s government has dealt with the COVID-19 pandemic. She plans to amend the Human Rights Act to prohibit discrimination against people who choose not to get vaccinated for COVID-19. The premier has said she believes unvaccinated people are the most discriminated group she has come across in her life.

While a radio host for Corus Entertainment, Global News’ parent company, Smith shared a tweet claiming that hydroxychloroquine was a cure for COVID-19, a claim that has been disputed by infectious disease experts. She later deleted the retweet and apologized for causing confusion. Smith has also suggested she believes ivermectin could be a useful tool against COVID-19, an idea that has also been rejected by infectious disease experts.

Last fall, Joffe signed his name to a statement AHS issued about ivermectin.

“Although some early studies into the use of ivermectin against COVID-19 suggested possible benefit, none of the recent high-quality trials where results have been reviewed and assessed have supported these findings,” the statement read. “There are genuine concerns of fraudulent data being reported from some of the early trials, and the largest trial that supported ivermectin use has already been withdrawn as a result of data fraud.

In a news release issued by the provincial government late Monday afternoon, Health Minister Jason Copping said Joffe “has dedicated himself to improving the health of Albertans throughout his career.”

“He brings this wealth of experience and knowledge to the role of chief medical officer of health. I look forward to working with him,” Copping said. “I also wish to thank Dr. Deena Hinshaw for her service and dedication to Albertans through the past several years.”

The government noted Joffe will continue to work under his current contract with AHS and not receive any additional compensation for his new role.

“I am honoured to be asked to take on the chief medical officer of health role for our province,” Joffe is quoted as saying in the news release. “I have always put the needs of my patients first and foremost throughout my career, which will continue as I take on this new challenge.

“I want to thank Minister Copping for giving me this opportunity.”

Opposition health critic David Shepherd issued a statement about Joffe’s hiring on Monday afternoon and said he hopes the new CMOH will speak to Albertans about the current COVID-19 situation and the spread of a number of respiratory illnesses.

“Hospitals continue to operate over capacity and children miss school due to illness at significant rates,” part of his statement reads.

“Danielle Smith, Jason Copping and Mark Joffe must all agree on the need to promote vaccination and condemn misinformation including any suggestion that COVID-19 vaccines are anything other than safe and proven to be effective at helping to prevent serious illness, hospitalization and death due to COVID-19.”

Hinshaw was Alberta’s CMOH for the entire duration of the COVID-19 pandemic. Her leadership often came under fire, particularly when she supported lifting almost all public health restrictions related to COVID-19 in the summer of 2021, which was followed by a massive wave of coronavirus infections in the province.

Hinshaw argued the decision to lift almost all restrictions — a move the province later backtracked on before eventually lifting restrictions again — was based on the fact that COVID-19 could not be eliminated so it was time for Albertans to learn to live with the disease.

At the time, she said getting rid of isolation requirements, asymptomatic testing and contact tracing would allow the province to focus on other health threats, including the opioid deaths and syphilis.

While some Albertans were critical of Hinshaw when she supported the lifting of public health measures, others voiced opposition to her when she brought in or expressed support for restrictions related to COVID-19.

Earlier on Monday, Smith said she would not be bringing mask mandates back to Alberta schools as the province grapples with a wave of viral illnesses that has seen thousands of students get sick.

Smith said while people who want to wear masks remain free to do so, she would not require them to be worn at schools, in part, because she has “heard loud and clear from parents that they want a normal school environment for their kids and we’re going to let kids be kids.”

–With files from The Canadian Press