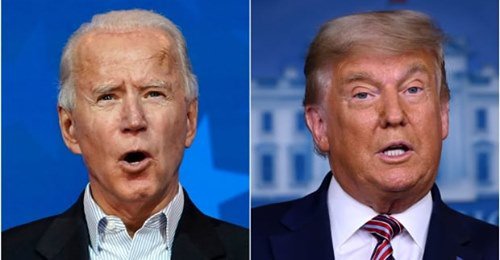 Democrat Joe Biden defeated President Donald Trump to become the 46th president of the United States on Saturday, positioning himself to be a leader who "seeks not to divide but to unify" a nation gripped by a historic pandemic and a confluence of economic and social turmoil.

"I sought this office to restore the soul of America," said Biden in a prime-time victory speech not far from his Delaware home, "and to make America respected around the world again and to unite us here at home."

His victory came after more than three days of uncertainty as election officials sorted through a surge of mail-in votes that delayed the processing of some ballots. Biden crossed the threshold of 270 electoral college votes with a win in his home state of Pennsylvania, and later in the day secured Nevada's six electoral votes.

Biden, 77, staked his candidacy less on any distinctive political ideology than on galvanizing a broad coalition of voters around the notion that Trump posed an existential threat to American democracy. The strategy proved effective, resulting in pivotal victories in Michigan and Wisconsin as well as Pennsylvania, onetime Democratic bastions that had flipped to Trump in 2016.

Biden's victory was a repudiation of Trump's divisive leadership and the president-elect now inherits a deeply polarized nation grappling with foundational questions of racial justice and economic fairness while in the grips of a virus that has killed more than 236,000 Americans and reshaped the norms of everyday life.

Kamala Harris made history as the first Black woman to become vice-president, an achievement that comes as the U.S. faces a reckoning on racial justice. The California senator, who is also the first person of South Asian descent elected to the vice presidency, will become the highest-ranking woman ever to serve in government, four years after Trump defeated Hillary Clinton.

ANALYSISDonald Trump gets no political obituary. He, and his legacy, aren't done
Trudeau, party leaders congratulate president-elect Joe Biden on U.S. election victory
Harris introduced Biden "as a president for all Americans" who would look to bridge a nation riven with partisanship and nodded to the historic nature of her ascension to the vice presidency.

"Dream with ambition, lead with conviction and see yourselves in a way that others may not simply because they've never seen it before," Harris said. "You chose hope and unity, decency, science and, yes, truth ... you ushered in a new day for America."

Biden was on track to win the national popular vote by more than four million, a margin that could grow as ballots continue to be counted.

Trump not giving up
Departing from longstanding democratic tradition and signalling a potentially turbulent transfer of power, Trump issued a combative statement while he was on his Virginia golf course.

It said his campaign would take unspecified legal actions and he would "not rest until the American People have the honest vote count they deserve and that Democracy demands."

Trump has pointed to delays in processing the vote in some states to allege with no evidence that there was voter fraud and to argue that his rival was trying to seize power — an extraordinary charge by a sitting president trying to sow doubt about a bedrock democratic process.