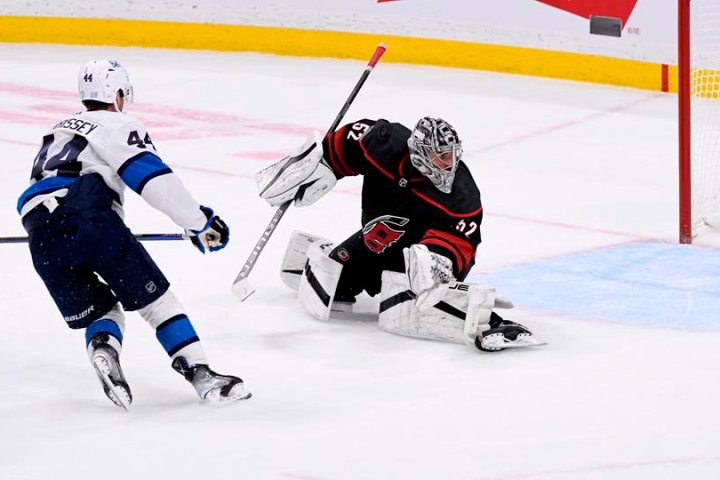 Giving up a three-goal lead late in the third period would be the undoing of many hockey teams, but the Winnipeg Jets managed to survive a stunning collapse to beat the Carolina Hurricanes 4-3 in overtime Monday night.

The Jets were in complete control until the Hurricanes pulled their goalie with over five minutes left. But Carolina scored three times in just over four minutes with the extra attacker to even up the score, only to lose in overtime anyway.

Josh Morrissey’s second goal of the game on the breakaway in OT gave the Jets the two points.

“We never wavered,” said Morrissey. “Hopefully we don’t get in that situation again, but be calm in a place where they’re kinda all over us.”

“There’s no panic on the bench,” said Jets head coach Rick Bowness. “Sometimes in hockey – you shoot the puck, it’s deflected, and it goes in. Sometimes you tip the hat.

“We got a point here, let’s go. Make sure we get that extra point. So, however we got it, we got it. And that’s the most important thing, we got the two points.”

With Connor Hellebuyck getting the night off, David Rittich was less than five minutes away from his first shutout with the Jets.

“It’s not for media what went through my mind,” said Rittich. “A lot of swear words, but yeah, we stick with that, and we get important two points, which is most important.”

Pierre-Luc Dubois had a three-point night with a goal and two assists, while Blake Wheeler had a pair of assists in the victory.

In just his fourth game since getting called up from the Manitoba Moose, Michael Eyssimont scored his first career NHL goal.

“Best day of my life for sure,” said Eyssimont. “I’ve visualized it for my whole life, so to finally get it done, you never know how it’s going to happen.”

Towards the end of a mostly uneventful first period, Dubois electrified the home crowd when he got sprung on a breakaway and beat Pyotr Kochetkov to get the Jets on the board first.

An unlikely source contributed a huge insurance goal in the second as the fourth line of the Jets pitched in.

David Gustafsson was sent in on a breakaway and was denied but Eyssimont followed up and buried the rebound for his first career NHL goal.

It looked like the Jets were going to coast to an easy win when Morrissey buried his second of the year just under four minutes into the third, but Carolina had other plans.

After pulling the goalie with over five minutes left, Jaccob Slavin’s first of the season gave the visitors a pulse.

Things really got tense when Andrei Svechnikov redirected his 13th of the season past Rittich, making it a one-goal game with 3:08 remaining.

With Winnipeg holding on for dear life and Carolina carrying all the momentum, the goalie was pulled one more time and with 39 seconds left, Martin Necas tied the game in front of a shell-shocked crowd.

How on earth would the Jets be able to overcome that kind of collapse? After resetting at the end of the period, each team had a couple of chances to score before Morrissey got free and ended a torturous game with his second of the night, taking a stretch pass from Dubois and wiring it through Kochetkov.

Rittich stopped 24 shots on the night as he picks up his third straight win in overtime, however unlikely this one was.

Winnipeg now heads out on a road trip starting Wednesday night in Minnesota. It’s a 6 p.m. start in St. Paul with pre-game coverage on 680 CJOB starting at 4 p.m.