Jason Kenney attacks ‘green left’ — which is most of the country 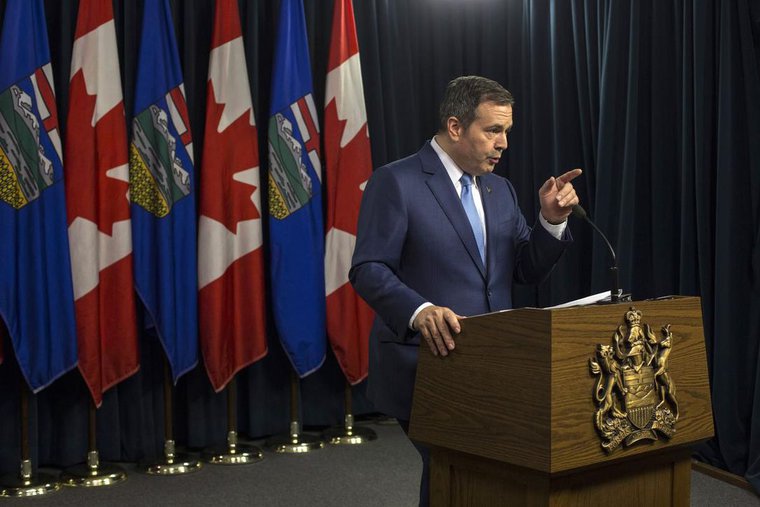 Claiming that Albertans feel “betrayed” and “unwelcome in our own country,” Jason Kenney had clearly hit the sweet spot of Alberta politics: raging against Ottawa.

Only a day after Monday’s federal election, the Alberta premier was in full battle mode, honing his mission to defend the oil industry, stir up Western resentment and stick it to Justin Trudeau’s freshly wounded Liberal government, now reduced to minority status.

Keen to depict anyone not swearing fealty to the oilsands as a traitor, Kenney will paint Canada as a country plunging towards disintegration if Ottawa fails to expand pipelines and end the carbon tax.

Given the righteous thunder that lies ahead from Kenney and Saskatchewan Conservative Premier Scott Moe, it will be crucial that we not lose sight of what Monday’s election results actually show. In an election in which climate and oil extraction were the central issue, about two-thirds of Canadians revealed they support strong action on climate.

In battling what he calls the “green left,” Kenney is ultimately squaring off against most of the country.

Indeed, Trudeau lost his majority in part because millions of Canadians voted for parties — the NDP, the Greens, the Bloc — that support bolder climate action than Trudeau’s Liberals.

Still, we will be constantly lectured about the need to heal our regional divisions. Certainly, these divisions will be endlessly hyped.

In fact, these divisions, while real, tend to be magnified by our first-past-the-post electoral system, under which Alberta and Saskatchewan look like a solid sea of blue, with every seat (but one) going to the Conservatives.

But 30 per cent of Alberta’s popular vote (and 35 per cent of Saskatchewan’s) went to candidates who weren’t Conservative — which would have resulted in numerous non-Conservative seats under a proportional representation system, which many Canadians thought they would get after Trudeau promised electoral reform in his 2015 campaign.

The appearance of provincial unity helps Alberta’s politicians make the case that they speak for an aggrieved province, unified against Ottawa.

This us-against-them strategy got off to a roaring start with the National Energy Program (NEP), which was introduced by Pierre Trudeau’s Liberal government in 1980.

Aimed at increasing Canadian ownership (both private and public) in the foreign-dominated energy sector, the NEP was initially well received across the country — including in Alberta, according to Gordon Laxer, professor emeritus of political economy at the University of Alberta.

“But the Trudeau government had overreached in grabbing a bigger share of oil revenues for the federal government, and Alberta politicians were quick to spot an opportunity to whip up fury against the program,” says Laxer, author of “After the Sands: Energy and Ecological Security for Canadians.”

Years later, that fury is easily rekindled, especially against someone bearing the name Trudeau, even though Justin Trudeau’s government invested $4.5 billion to keep alive the Trans Mountain pipeline expansion, despite fierce resistance from Indigenous and environmental groups.

Certainly, Alberta politicians have found it effective to blame Ottawa, thereby directing any popular resentment away from themselves — for their failure, for instance, to drive a tougher bargain with the multinational oil industry, as Norway has done.

Although Norway and Alberta both have generous oil deposits and small populations, Norway has driven a far tougher bargain with Big Oil, demanding a much larger share of oil revenues for its people.

As a result, while Alberta has built up a heritage fund for Albertans worth $18 billion CAD, Norway’s heritage fund is 60 times larger — worth $1.3 trillion CAD. That translates to about $260,000 CAD per Norwegian, making recent declines in international oil prices — and the world’s eventual transition away from oil — less worrisome in the Nordic country.

Alberta’s politicians have left Albertans much less prepared for the green energy shift ahead. Energy journalist Andrew Nikiforuk describes Alberta’s difficult situation: “The low fruit has been picked and nobody saved anything for the future.”

As the Conservative leaders in Alberta and Saskatchewan ramp up their war against the Liberal minority government, we can’t allow Trudeau to cave in to their threats.

Let’s remember that Western alienation is a brew carefully stirred by Alberta politicians eager to ensure that, when Albertans feel they’ve been fleeced, they look outside the province for culprits. thestar