‘I’ll be back’: Gain Wah owner vows to try and restart Chinatown restaurant after devastating fire 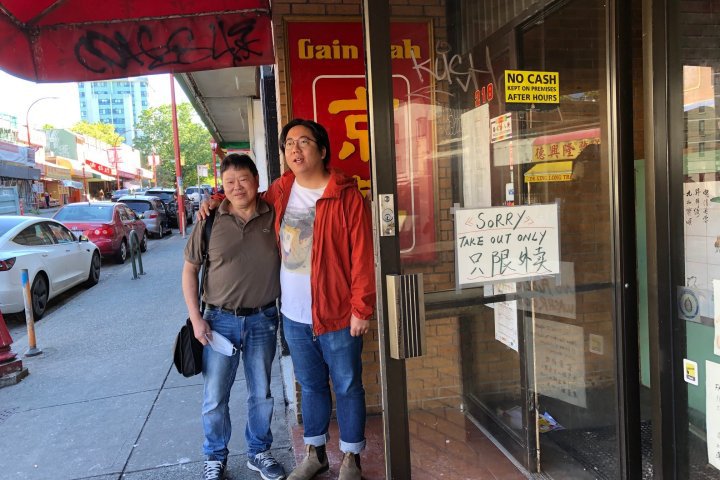 A legacy restaurant in Vancouver’s Chinatown known for keeping prices cheap to help feed the area’s low-income residents is grateful for the support it’s receiving from the community after a devastating fire earlier this month.

Gain Wah owner Andrew Leung said the GoFundMe campaign organized by the Youth Collaborative for Chinatown, will help him pay his rent, bills and staff as he navigates the insurance process to restore his popular Keefer Street eatery.

“It will push me forward to get it going,” Leung told Global News in an interview Sunday.

“My reaction, the first day is just horrible.”

Leung’s dining room and kitchen are a disaster after being inundated with water but the restaurateur who turned 65 on Saturday is determined to resurrect 41 years of memories.

On Sept. 9, Leung had been setting up in the kitchen when he heard a boom and then noticed a fire had erupted near the stove.

He grabbed a fire extinguisher to try and douse the flames before alerting his staff and helping tenants evacuate the building.

“I told the girls to grab their bags and get out,” Leung recalled.

The fire was accidental, according to Deputy Operations Chief Trevor Connelly with Vancouver Fire Rescue Services, who confirmed it started on the ground floor in the restaurant kitchen and then travelled up the exhaust system the entire height of the building before exiting on the roof.

The fire also spread to some of the building’s wood structures at street level and at the roof line.

The ground floor including the Gain Wah’s dining room sustained heavy water damage from the kitchen’s sprinkler system while nearly 40 tenants of the Keefer Rooms have been temporarily displaced due to water damage originating from the top floor and fire hoses.

“I know them all so I really feel sad when this happened,” said Leung.

When his friend retired eight years later, Leung took over as sole owner.

The Gain Wah dining room has been the backdrop for many TV shows and films including 2016’s Finding Mr. Right 2, where Leung had a cameo passing a takeout order to actor Wu Xiubo.

During the pandemic, Leung switched to takeout service only and reduced his staff from eight to three employees – while he worked 13-hour days, six days a week to survive.

Throughout the years, Gain Wah has kept its prices low, even maintaining a menu of all-day specials for under $10 – including real crab meat fried rice for $9.

“A lot of people around here don’t really have much money,” explained Leung.

“So $9 is actually affordable for them and I like to help them out because they help me out a lot too.”

“I lose the job, I lose my customers.”

Li, who has been a familiar face at Gain Wah’s front counter since 1993, considers the restaurant her “home” and remembers learning English on the job.

“I have the good feeling here because everybody is my teacher,” Li told Global News Sunday.

Now the neighbourhood, including Chinatown community organizer Nicolas Yung, who started eating at Gain Wah as a student – is coming together to support the Gain Wah owner and staff.

“I basically have lunch with every key player in Chinatown here before,” said Yung with the SRO Collaborative.

During challenging times, Yung said he heard stories of hurt and resilience.

“I truly think I learned how to love really, like here, more than anywhere else,” Yung told Global News.

Yung works in conjunction with the youth group fundraising to help ensure the Gain Wah legacy lives on – either with Leung – or with a new owner at the helm.

“It’s going to be a lot of work, especially for my age, but I will still try my best to restart it,” Leung told Global News.