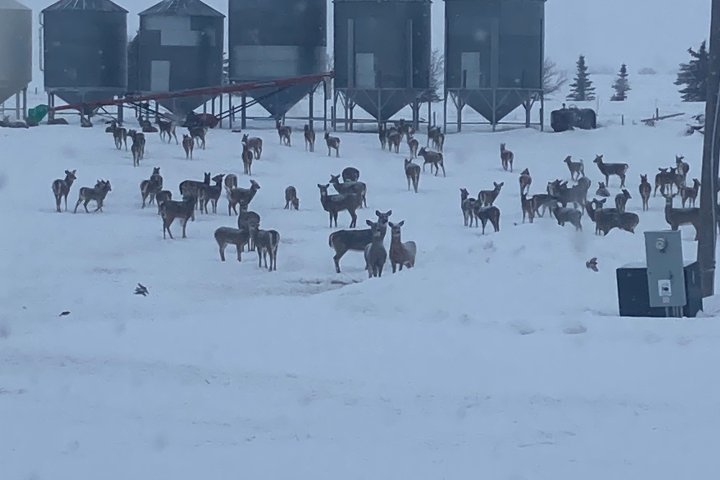 A farm in Dundurn, Sask., has become home to hundreds of deer this year, where they pick bits of barley, canola, and peas off the ground scattered amongst grain bins.

While deer might look serene to those who catch a glimpse while out for a winter walk, farmer Iver Johnson said a wildlife invasion is ruining his land.

“It’s an overpopulation of deer and nobody wants to seem to do something about it,” Johnson complained.

“They are just making a terrible mess of my yard with the excrement and urine.”

The Saskatchewan Wildlife Federation reports that deer visiting farmyards is incredibly common across the province, but maybe not in numbers as high as Johnson’s farm is experiencing.

“Certainly, I’ve seen it before, but I don’t know if we have seen it to this extent,” said Darrell Crabbe, Federation executive director.

Johnson said the deer are destroying his winter feed and planted shrubs, as well as fences put up to keep his horses safe in the pasture.

“Their survival requirements kicked in much earlier than when Mother Nature usually would usually have that occurring,” said Crabbe, referring to the extreme cold snap that occurred in November and December of 2022.

“They certainly are probably in a starvation situation,” said Crabbe, explaining this is a likely reason why they have sought out Johnson’s yard in particular.

Johnson contacted Saskatchewan Crop Insurance, but they said they could do nothing because the bales were left in the field instead of being stacked in piles.

“I’m not as concerned about the cost of the feed,” said Johnson. “If this problem continues, the deer population is going to explode, and we are going to have worse problems next year.”

Johnson said he has brought wildlife conservation officers out to his yard who do their best to help, but he isn’t having any luck with the Ministry of Environment.

“The people in Regina who are making the rules don’t have a sniff of a clue of what’s actually going on out here. When the conservation officers tell them what is going on, they just kind of shrug it off.”

The wildlife federation doesn’t agree, however, that a high number of deer this year will mean a population increase next year.

“I’m just speculating that that probably won’t be the case,” said Crabbe. “We’ve seen this scenario play out before, and usually, many of them will succumb to the effects of the winter and perish.”

Another issue of concern is the population of coyotes that come along with a large herd of deer staying put in one place. Johnson said he has already found one deer brought down by coyotes inside in yard.

“I’m scared to let my dogs out because coyotes will lure a dog away and kill the dog.”

Fewer deer hunters in the area will make it more and more difficult to regulate the population year after year.

“There was a very noticeable decrease in the number of tags purchased, between 15 and 17.5 per cent,” Crabbe explained after analyzing a survey done of 2022 statistics by the wildlife federation.

This is the first time the number of legal, over-the-counter tags for whitetail deer has decreased in the past 12 years.

Hunters are much more interested in bringing home bucks rather than the does, which gives the deer population a higher chance of repopulation as very few bucks are needed to service a high population of does.

“They are hunting for horns,” he said. “Meat is secondary. That does nothing to control the population of the deer.”

The Ministry of Environment said that if the population of deer reaches extreme levels, they will issue additional hunting licenses, or impose an “antlerless season,” in which hunters would only be able to harvest does.

Johnson said that he has found three dead deer so far on his property from the herd.

Some he claimed to have damage clearly inflicted by the coyotes around his farm, but others had no visible damage that could have determined the cause of death.

“We are seeing this happen in a lot of locations where deer are dying, probably from a disease, or from starvation,” said Crabbe.

Only a biologist would be able to perform an autopsy to determine the cause of death of the deer on Johnson’s property.

Johnson was contacted by a biologist’s assistant about a week ago and was told that a biologist would be in contact with him about the situation. He still has not heard back.

The Ministry of Environment said that “fencing, hay stacking, scare cannons and chemical wildlife deterrents/repellents” are effective ways to reduce damage done by the deer population, but Johnson said that the deer are already jumping or going through his five-foot panels on his property and the deer don’t seem to be particularly afraid of loud noises.

“I’ve shot coyotes in amongst the deer and the deer just stand there and look,” said Johnson. “They’re not scared. Scare cannons won’t work.”