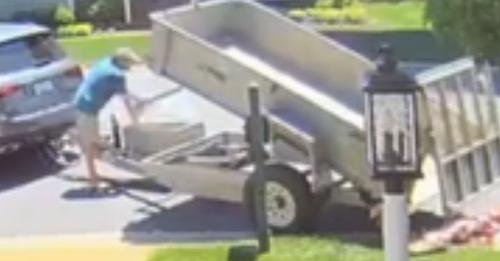 A Virginia dad brought out the best in his daughter by showing her the worst of himself last month, after he dumped 80,000 pennies in his estranged family’s driveway to cover his final child support payment.

The petty penny incident played out in Richmond, Va., shortly after the girl, Avery Sanford, turned 18. Video from the home shows the man backing up a trailer and depositing a huge pile of pennies in the family’s driveway before driving off.

Sanford says she and her mother were shocked and hurt by the stunt, but they found a way to turn it around by donating the $800 to a local shelter for domestic abuse victims. That gesture has since spurred more than $5,000 in additional donations from people who were moved by the story, according to the shelter.

Sanford says her mother was not expecting the pennies, and she did not immediately recognize her ex when he showed up with the trailer.

“My mom came out and was like, ‘What are you dumping in my yard?'” Sanford told WTVR in an interview. “She didn’t know who it was until he shouted, ‘It’s your final child support payment!'”

Sanford’s mother called police and an officer showed up to document the incident, authorities confirmed to the Washington Post. However, no charges were filed.

READ MORE: 30 going on 13 — Mom charged after posing as teen daughter at school

Sanford came home from high school that afternoon to find the pennies still sitting in the street.

“It’s not just her that he’d be trying to embarrass,” Sanford said, speaking of her mother. “It’s also me. It’s also my sister, and it’s upsetting that he didn’t really consider that before he did this.”

Sanford scooped up all the pennies with the help of some of her friends. Then she and her mother packed up the coins and donated every penny to Safe Harbor, a shelter that supports survivors of human trafficking and sexual and domestic violence.

“Turning around and donating that money to moms and children in need, I feel like that really just turns this situation into a positive one,” Sanford said. “People can learn a lesson from it.”

Cathy Easter, who runs the shelter, hailed the family for turning their “negative experience” into a positive for others.

“They found a way to turn this around,” she told the Washington Post. She added that the shelter has seen a $5,000 surge in donations since the story first hit the news, with many donors citing it as the reason for their own gifts.

“It’s truly such a beautiful story,” she said. “The importance of being kind to each other cannot be stressed enough.”

It’s not the first time that someone has used pennies as a spiteful form of payment. Earlier this year, a Georgia autoshop owner left 91,500 oil-covered pennies outside his ex-employee’s home after the ex-employee fought for months to receive his final paycheque. The employee had quit the shop in November 2020, citing a toxic work environment.

Sanford’s parents have not been publicly identified, but her father did explain his penny stunt in a telephone interview with WTVR.

The man said his emotions got the better of him, and that he was driven by 18 years of built-up frustration. He added that the last thing he wanted to do was create a bigger rift between himself and his daughter.

Sanford says she hasn’t spoken to the man in years, and that his latest stunt only proves that she was right to cut him out.

“It is really hurtful and damaging to your kids when you do things like that,” she said. “It doesn’t matter how old your kids are … the actions of your parents always have some impact on you.”globalnews