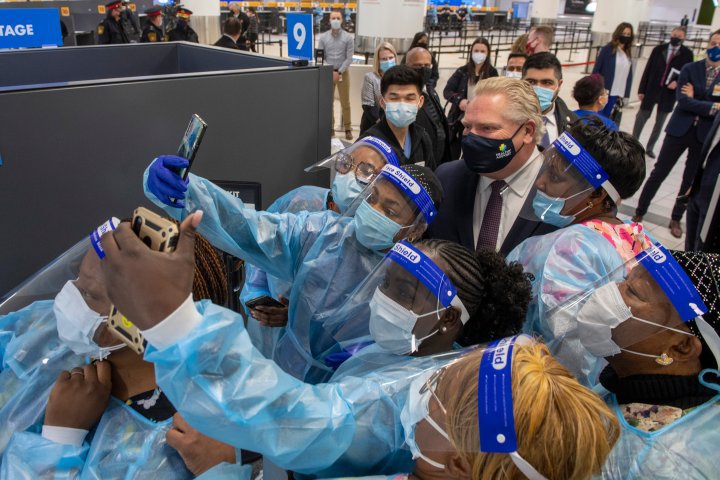 In a bid to shore up staffing in Ontario’s hospitals, the Ford government is planning new legislation to allow health-care workers from other Canadian provinces immediately start practising in Ontario.

The new “as of right” rules, the government said, would allow health-care workers who are registered in other Canadian jurisdictions to immediately practise in Ontario without having to register with a provincial regulatory college.

“We need as many people as possible,” Premier Ford said. “We welcome you with open arms.”

While the Ford government said the pan-Canadian portable registration model would be the first of its kind in Canada, the government offered few details on how the plan would work practically.

The province’s College of Nurses, for example, says registration is a “legal requirement” for anyone who wishes to practise nursing in Ontario — a requirement that the premier suggested would be overhauled.

“You arrive here with your credentials and we’ll find a job immediately for you,” Ford said at a news conference in Windsor. “You won’t have to go through any bureaucratic red tape.”

The government said out-of-province health-care workers would only be eligible and permitted to work in Ontario “if they have provided safe, competent, and ethical health care in their home province or territory.”

The details of who would perform the background research on the individual health-care worker were not shared by the government.

The legislation would also allow workers from across the health-care system to be easily redeployed to the front lines as the province experiences surges in demand and increased wait times in emergency departments.

The government said the law would “increase staffing levels on a short-term basis” by allowing nurses, paramedics and respiratory therapists to work outside their regular responsibilities or settings “as long as they have the knowledge, skill, and judgment to do so.”

“This will provide hospitals and other settings with more flexibility to ensure health care professionals are filling the most in-demand roles at the right time,” the ministry of health said in a news release.

The government’s announcement was short on details on exactly how the redeployment law would work in practical terms, or whether the individual scope of practice is being expanded to allow nurses and other workers to work outside their usual departments.