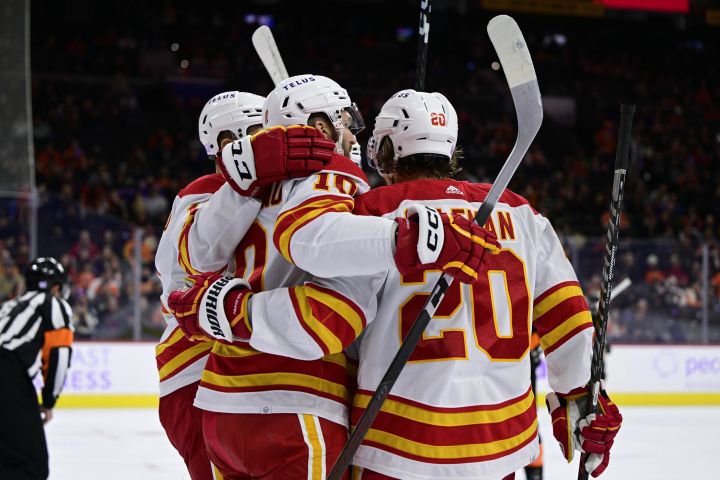 Blake Coleman had a goal and two assists to lead the Calgary Flames to a 5-2 victory over the slumping Philadelphia Flyers on Monday night.

Jonathan Huberdeau, Dillon Dube, Rasmus Andersson and Trevor Lewis also scored for the Flames, who were playing the third contest of a six-game trip.

Tanner Laczynski and Joel Farabee scored for the Flyers, who have lost seven in a row.

The Flames jumped out to a 2-0 lead in the first.

Huberdeau put the Flames on the board 4:43 in. After Philadelphia’s Tony DeAngelo turned the puck over in the Flyers zone, Huberdeau raced ahead on a two-on-one and finished his third goal of the season with a wrist shot past Carter Hart’s glove side.

Dube tallied in nearly the identical manner with 6:09 to play in the first, firing a wrist shot past Hart on a two-on-one. This one came from the opposite side and got past Hart’s glove.

Philadelphia scored just 36 seconds later, when Laczynski notched his first NHL goal on a deflection of Kevin Hayes’ shot from the point. The assist gave Hayes points in six-straight contests, with three goals and four assists.

Andersson recorded the lone goal of the second when his slap shot from long range went off the stick of Farabee and past Hart 3:29 into the period.

Farabee made amends with 11:57 left in the third, when he pulled Philadelphia within 3-2. Flames winger Andrew Mangiapane misfired a pass from the boards right to Farabee, who fired a wrist shot from the slot past Jacob Markstrom’s blocker side.

Coleman, playing in his 400th career NHL game, netted the first of two Flames empty-netters with 1:51 left in the third. Lewis finished the scoring with 37 seconds remaining.