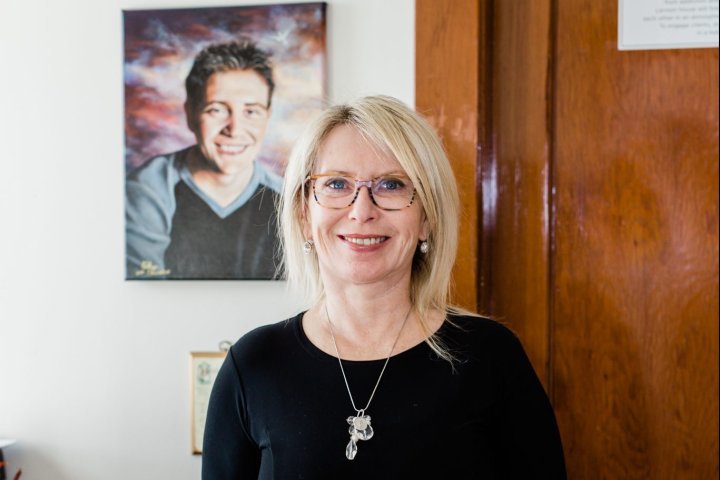 Dianne Young says she sometimes walks the hallways of the addictions mental health recovery home she runs in P.E.I., wishing her son Lennon could have had a chance to heal there.

Lennon Waterman was 29 years old when he lost his battle with drug addiction and mental illness in 2013. His body was found along the shores of Charlottetown’s North River five months after he took his own life by entering the water on a cold November night.

Since his death, Young has become a fierce advocate for better access to mental health and addictions treatment for those in crisis. That work has culminated in the opening two years ago of a non-profit treatment home she named after her son, Lennon House.

It took years for her to finally open the facility, in part due to funds.

That’s why she says she is disheartened to hear the federal government’s election promise to quickly begin rolling out new money for mental health care has stalled.

“It is frustrating for sure,” Young said.

“There’s just so many different areas that the money could go in.”

It was a marquee promise of the Trudeau Liberals’ last election platform: $4.5 billion over five years for a new mental health transfer to the provinces and territories.

While on the hustings in August 2021, Prime Minister Justin Trudeau said this brand new transfer was needed “because mental health should be a priority.”

But despite the sense of urgency in Trudeau’s remarks last year, no money has yet materialized for this new Canada mental health transfer, including an initial $875 million that was supposed to have been spent or budgeted by now, according to the Liberal party’s 2021 election platform.

The Liberal platform document included a line-by-line costing of all its election promises, and it outlined a promise to spend $250 million in 2021-22 on the new mental health transfer, and then $625 million in the current 2022-23 fiscal year, with additional amounts over the next three years adding up to $4.5 billion total.

None of the promised spending over the last two fiscal years has yet been allocated or spent.

Sarah Kennell, national director of public policy for the Canadian Mental Health Association (CMHA), says those across Canada who’ve been urging governments for more resources to treat patients in need of mental health care are discouraged the federal government’s April budget contained no money earmarked for this new transfer.

Mental health issues and addictions have become an issue of major concern across the country, with provinces, territories, municipalities and small communities alike grappling with growing numbers of residents in need of services.

Pandemic lockdowns and anxieties have only exacerbated a system already in crisis, Kennell said. For example, CMHA centres across the country have been seeing an increase in parents seeking help for their children and teens who have been out of school for prolonged durations now experiencing eating disorders, increased anxiety and social disconnection, she said.

“The needs are significant and they really span population groups, age groups, communities. No community is untouched. No family is untouched,” Kennell said.

“The mental health system wasn’t equipped to deal with the strain that was on it prior to the pandemic, and now it has only become much worse as a result, which is why we need to see this investment now more than ever.”

Last week, federal Mental Health and Addictions Minister Carolyn Bennett faced tough questions about the Liberals’ promised mental health transfer — particularly the $875 million that was to have been spent by the end of this year.

“The platform promised for that money to be spent right now. So that was a mistake? To have made that promise at election time?” Conservative MP Mike Lake asked Bennett at a federal standing committee meeting June 15.

She pointed to $5 billion over five years committed to the provinces and territories in 2017 for mental health through bilateral agreements, saying that consultations are now underway about how to roll out the new transfer money after questions arose from some stakeholders about where those previous mental health dollars went.

“I have been coast to coast in this country. There were concerns that the $5 billion in the bilateral agreements wasn’t transparent and accountable for the money that was being spent,” Bennett told the committee.

That’s why, in March, Ottawa announced a plan to begin by developing national standards for the treatment of mental health and substance use in Canada, she said.

“They (stakeholders) were worried that if the money went… without the kind of rigour that is in the childcare agreements, that we wouldn’t be able to prove what works and what doesn’t work and how we find what works.”

The statement reiterated that the government’s early engagement with partners and community-based organizations “showed that this new permanent transfer must build in transparency and accountability.”

“The minister will continue to work with provinces and territories to inform the design of the new Canada mental health transfer, as well as a comprehensive, evidence-based plan with shared data on indicators and outcomes,” the statement said.

Kennell calls this a “delay tactic.”

“Let’s put the money where it should be, where it’s been promised to be, and get those conversations underway as we develop standards, as we create strategy. In our view, there shouldn’t be a holdup.”

Leanne Minichillo, a mother and Toronto resident who suffered for years with undiagnosed attention deficit disorder and borderline personality disorder, says she finds the lack of action on this key election promise “infuriating.”

Her life came to a crashing halt when, at 40, she realized she needed help but was afraid her then-four-year-old daughter would be taken from her.

“I finally got to a point where I went to a local hospital’s emergency room because I was feeling terrible. I mean, I had suicidal thoughts and everything,” she said.

Minichillo was eventually able to access psychiatric talk therapy covered by the Ontario provincial health plan thanks to a neighbourhood connection — a free treatment option many Canadians would not be able to access so easily.

That’s why she has become a vocal advocate for mental wellness for parents and children, to save others like her from suffering for so long in silence.

And it’s why she’s frustrated the Trudeau Liberals’ promise for more support for mental health resources across Canada has not been a more urgent priority.

“I’m not the norm. I’m so lucky to have what I have,” Minichillo said.

“But I think about children, I think about the parents and people who aren’t able to get this help. It’s only going to lead to increased tax dollars as we go forward, because those issues that children are experiencing now are going to manifest in adults — look what happened to me.”

A few days ago, she was travelling on Toronto’s GO Train with her daughter, and it was delayed because a person had attempted suicide on the tracks, she said.

“It’s so unfortunate that this person had to go to this extreme instead of being able to access proper care to help them,” Minichillow thought to herself at the time.

“When we’re talking about campaign promises, people have to start to be accountable and held accountable for the things that they say — instead of worrying about their own image, once they make the promise, they have to follow through.”