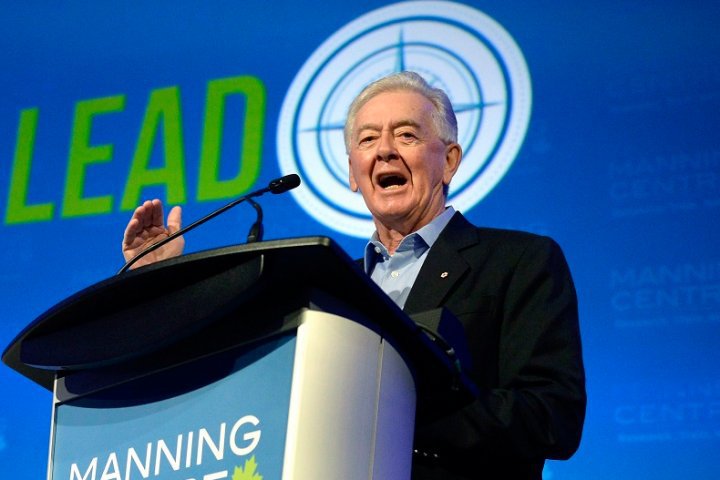 Premier Danielle Smith has struck a committee to investigate how the Alberta government responded to the COVID-19 pandemic, and has appointed former Reform Party leader Preston Manning to chair it.

Smith said Thursday that Manning and the panel are to take feedback virtually from experts and the public, then issue a final report and recommendations by Nov. 15.

Manning is to pick the other panel members subject to approval by Smith.

“There are valuable lessons we learned from the Alberta government’s response to the COVID-19 public health emergency,” Smith said in a statement.

“It’s important that we apply those lessons to strengthen our management of future public health crises, and the panel’s recommendations will be key in doing so.”

The panel is not only look at government decision-making, but also its effects on jobs, children, mental health, and protection of rights and freedoms.

Smith’s spokesperson, Becca Polak, said the bulk of the panel’s work will be document review of legislation, regulations and ministerial orders, but “the panel will consider public submissions made through the web page.”

Polak told Global News in an email that Manning was chosen because of his “very strong record of public service and significant experience as a leading policy expert.”

She said Manning “will assemble a panel that has well-rounded expertise to develop sound recommendations to the government.

In an opinion column published Thursday by Postmedia, he stated, “The purpose of this panel would not be to review or rehash the entire gamut of the Alberta government’s response to COVID — which would be a vast and time-consuming undertaking.

“The specific task of the panel would be reviewing the Alberta statutes that informed and authorized the government’s response to COVID-19.”

This is Manning’s second involvement in a COVID-19 inquiry.

In November, he announced plans for a citizen-led and funded cross-country inquiry into the effects of Canada’s response to the pandemic.

The National Citizens Inquiry is now seeking commissioners to begin its work.

At the time, Manning said it was critical to have citizens lead the process to preserve its integrity.

“(Governments) commissioning an inquiry whose primary purpose is to investigate governmental response would mean that governments would be investigating themselves,” Manning wrote Nov. 2. “In the eyes of many Canadians, such a commission would lack the necessary credibility.”

Polak said Manning would be stepping aside from his role at the National Citizens Inquiry to avoid any conflict of interest.

Manning and Smith have been critical of government-imposed health restrictions such as masking, gathering rules and vaccine mandates during the pandemic.

Smith has questioned the efficacy of the methods and their long-term effects on household incomes, the economy and mental health. She has promised health restrictions and vaccine mandates will have no role in any future COVID-19 response in Alberta.

Smith has also criticized both Dr. Deena Hinshaw, the former province’s chief medical officer of health, and the Alberta Health Services board for failing to provide good advice and to help prepare for the pandemic, in turn forcing the province to impose health restrictions and vaccine mandates.

She replaced Hinshaw and the board shortly after taking office in October.

Lori Williams, professor of policy studies at Mount Royal University, said it’s legitimate to have a review in order to better deal with future health crises. However, she said the chair selection is not neutral.

“It’s not impartial. It looks like it’s furthering or driving an agenda rather than engaging in an inquiry into what legitimately should be looked at and improve for the future,” she told Global News.

“Normally, what you’d do is pick somebody — say, a retired judge or someone who’s seen as a well-informed, neutral party — who’d be looking at a number of different perspectives and arguments for how to improve dealing with this sort of thing in the future,” Williams said.

“That’s not what we have in Preston Manning. He’s very much looking for — he’s said this publicly — he’s looking for people who’ve been harmed by the policies. He’s interested in looking for, and this is a quotation, ‘expert testimony… particularly from those whose alternative medical narratives or alternative scientific narratives were ignored or even censored during the time of the pandemic.’

“And perhaps more even more concerning, he’s going to decide who will be the other members that will be involved in guiding the inquiry,” Williams said.

Smith has long aligned herself with those questioning the mainstream science approach to the pandemic.

She previously endorsed debunked treatments, such as ivermectin and hydroxychloroquine, and embraced fringe views of the pandemic such as the Great Barrington Declaration.

She announced last fall she wants to hear from Paul Alexander, an adviser to former U.S. president Donald Trump. Alexander has referred to COVID-19 vaccines as “bioweapons.”

Addressing and redressing COVID-19 grievances was the centrepiece of Smith’s successful campaign last fall to leverage discontent within the UCP to replace Jason Kenney as party leader and premier.

Smith promised a range of initiatives to combat what she has described as injustices and attacks on personal freedoms.

Some of them — such as an inquiry, firing Hinshaw and the AHS board, and not mandating masks in schools — she followed through on.

Others she did not.

Smith promised a bill last fall to make it a human rights violation to discriminate against anyone for their COVID-19 vaccine status. She shelved it just before the fall sitting started in late November, saying more study was needed.

She also promised to explore granting pardons and amnesties to those convicted of COVID public health violations. She recently announced she won’t do that, because as premier she doesn’t have that power.

Smith has since been criticized for saying she has been talking to Crown prosecutors about COVID-19 cases.

She has said no such talks took place but that she did ask Justice Minister Tyler Shandro and the deputy attorney general to consider whether the cases are winnable and in the public interest to pursue.

The Opposition NDP said the appointment of Manning is “politically-motivated and has nothing to do with improving health care.”

“This is a desperate call for help from Danielle Smith for Preston Manning to help cement her support on the far right,” said David Shepherd, Alberta NDP Health Critic.

“I know families who are struggling to pay their utility bills and their car insurance will ask why this is how their tax dollars are being spent, and health-care workers will be wondering why our ambulances and hospitals are starved for resources.”

Shepherd called it a misuse of taxpayers’ money and said Albertans should be outraged.

“For the cost of Smith’s taxpayer-funded COVID-19 sideshow, the government could instead give $600 affordability payments to another 3,700 students and single-income earners,” he said in a statement Thursday.