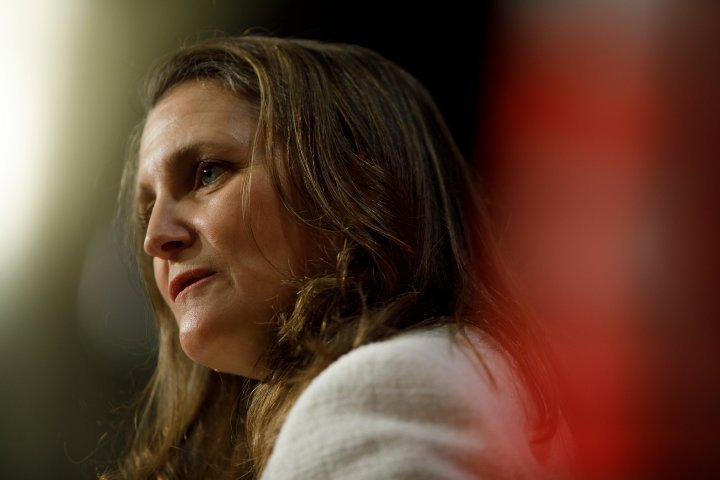 Europe is in a “very economically vulnerable position,” Deputy Prime Minister Chrystia Freeland warned, as Russia continues to strangle its flow of gas to the region.

Speaking to reporters outside a hydrogen production facility in Alberta on Thursday, Freeland reiterated that Canadians must recognize the energy challenge European countries are facing.

“We have a political responsibility to do whatever we can to help them with this energy crisis that they are going through,” Freeland said.

“They know that Canada is there, and we are working on all the practical ways that we can support Europe.”

Last year, 40 per cent of the natural gas supplied to the EU came from Russia, according to the BBC — and Germany led the pack as the largest importer of Russian gas in 2020.

But Germany has been experiencing a reduction in the power source as the Russia-Ukraine war continues.

Earlier this month, Canada granted an exemption to the economic sanctions issued against Russia in response to the invasion of Ukraine.

The two-year waiver allows six Siemens Energy turbines, which were in Montreal for repairs, to be returned to Germany for use in the Russian state-owned Nord Stream 1 pipeline.

When a Ukrainian news publication pressed Freeland on Thursday about the decision to grant the waiver, the deputy prime minister highlighted Canada’s support for Ukraine.

Freeland also pledged to “continue with the sanctions pressure on Russia.”

However, as colder winter months draw nearer, European countries are scrambling to fill the energy gap resulting from Russia’s squeeze on its shipments.

Germany has increased gas imports from other countries — including Belgium and the Netherlands.

But Gazprom announced plans last Friday to once again shut down the Nord Stream 1 pipeline from Aug. 31 to Sept. 2 to undergo “routine maintenance.”

Canada has called the repeated shutdowns a calculated move aimed at deepening divisions between Western nations and reducing support for Ukraine.

Russia could succeed in achieving the domestic disruption Trudeau described, according to Naomi Hossain, a professor of development politics at the American University in Washington D.C. who is studying energy, fuel and food riots.

Hossain told Reuters that, as a conservative estimate, 10,000 energy-related protests have taken place worldwide since last November – with more expected in an uncertain future.

“If I were a politician, I’d be really worried,” she said.

The European Union committed to reducing its Russian fossil-fuel imports by two-thirds and cutting gas demand by 15 per cent by the end of the year, according to Reuters — further exacerbating concerns about how Europe will keep the power on this winter.

One economist suggested Europe should drop its focus on climate change and instead prioritize keeping their countries warm and their lights on in the coming months.

All options should remain on the table in efforts to avoid power outages, Tagliapietra said, “including polluting ones.”

— with files from Reuters