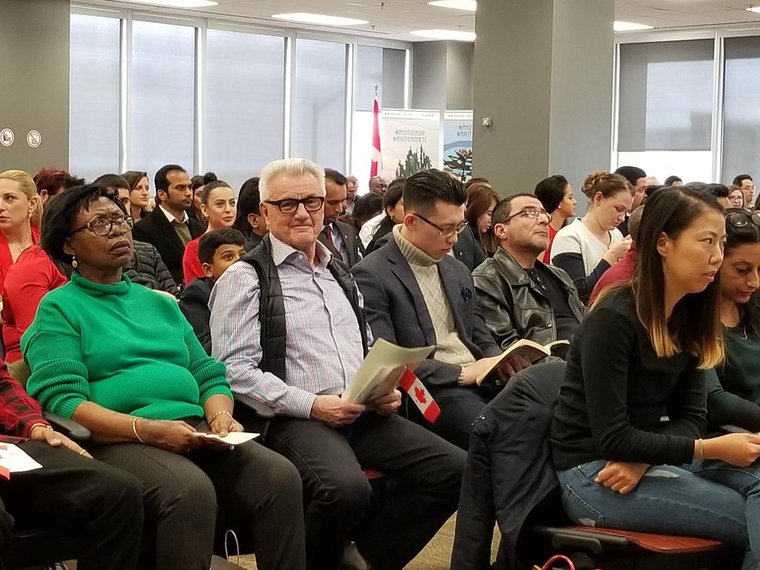 On a drizzly Tuesday afternoon in a grey government office in Scarborough, the American writer John Irving became a Canadian citizen.

He held his red and white Maple Leaf flag along with 83 other people from 35 countries who also swore allegiance to the Queen and this country. On the other side of the room sat his wife, Janet Turnbull, daughter Eva and assistant Khalida.

After the ceremony, they came over to give hugs; his eyes welled up with a few tears that didn’t fall. You might say they were misty. The smiles on all their faces were huge.

“I was moved because Janet was there and Eva was there, and my being here is because of her,” Irving, 77, says in an interview the next day in his capacious personal office in downtown Toronto. “At my age, ending up here is a love story.”

His walls speak to the importance of family, covered with photos of his wife, daughter, sons, parents — family history and his own mementoes; himself on the cover of Time magazine, among them. This, he says “is not a political story.”

Neither is it a straightforward story, one with a few quick questions about what it means to be a good citizen and how he’ll take up that mantle here. As in his art, Irving’s answers meander; he talks about politics and the U.S., and even about going to boarding school in Austria. All the moments in his life that have led to this one. He begins an anecdote, then circles back and picks up the thread again, a technique that propels the main narrative of his life forward.

Or gives him time to think about what he’s really going to say. So let’s start with the love. Janet Turnbull. He met her here, about 30 years ago, in the Brigantine Room at Harbourfront where he was appearing as an author. She was the editor at Seal Books and Doubleday Canada, which was the publisher of the paperback edition of “The Cider House Rules.” “We were kind of smitten pretty instantly,” he says with a smile.  thestar