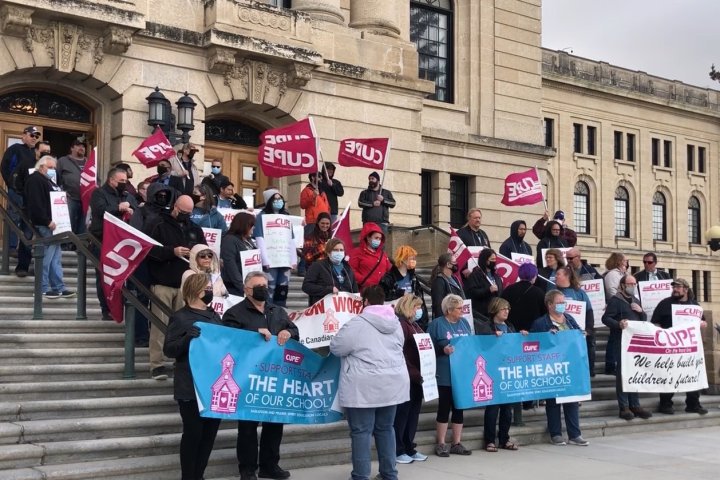 Dozens of educational workers rallied on the steps of the Saskatchewan Legislative Building in Regina Tuesday to call for more funding for the education sector.

The group was joined by members of Saskatchewan’s opposition party, CUPE Saskatchewan and community members who voiced their concerns regarding what they say are devastating cuts to education that are impacting the quality of education in Saskatchewan.

CUPE Saskatchewan says it represents more than 7,000 education workers in the province that work in 40 different disciplines.

One of them is educational assistant Tena Schneider who is an employee in the Chinook School Division, which encompasses schools in the southwest region of the province.

Schneider, who took part in what was called the Day of Action event outside the legislative building, shared her displeasure after the school division announced intentions to reduce full-time educational assistant hours by 30 minutes per day.

She said not only will this decision reduce educational assistant wages by at least eight per cent, but kids will also suffer.

“Some of the students struggling academically don’t fit into our cookie-cutter mold. So the classes offered in a smaller school like your Physics 30, Chemistry 30 or Biology, they may not be able to take those,” explained Schneider.

“So the classes they have to take to graduate are online and they need additional support working through those online classes.”

Schneider and her peers are calling for the province to reconsider the amount of money it pledged for education in its provincial budget released in March, which amounts to a 1.5 per cent increase in operational funding.

CUPE members did not ask for a specific dollar figure but asked for at least enough to prevent cutbacks that the union said are being considered by many of Saskatchewan’s school divisions.

Dustin Duncan, the province’s education minister, said their government has dedicated an additional $7 million on top of the operational budget for education in this year’s budget to support the hiring of up to 200 more educational assistant positions.

“When we do our submission to the treasury board, first and foremost we look at what the biggest cost drivers are for school divisions, and in most school divisions the largest driver is teacher salaries,” Duncan mentioned.

“That’s already been negotiated at 2 per cent, so we’re not looking at 4.5 or 4.7 per cent for something that takes 2 per cent to cover.”

Duncan added that school divisions still have time to analyze their budgets before the deadline to bring them to the government in June.