Edmonton Oilers strike Lightning for 5th straight win: ‘We’ve got some grit to us now’ 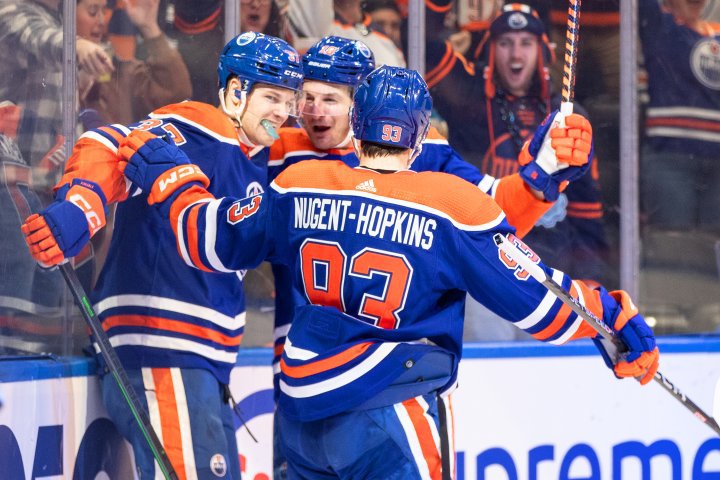 The Edmonton Oilers extended their winning streak to five games with a 5-3 triumph over the Tampa Bay Lightning Thursday night at Rogers Place.

“I think the confidence, its going in the group,” captain Connor McDavid said after the win.

Ryan McLeod tipped in Vincent Desharnais’ point shot to get the scoring started 6:13 into the first.

Tempers flared late in the first when Patrick Maroon took down McDavid, setting off a scrum in the corner to the right of the Lightning net. Leon Draisaitl scored on the ensuing power play.

“I was quite happy with our response,” Oilers head coach Jay Woodcroft said. “That’s the sign of a good team—when there’s no emotion, they look to create it. They have certain people that go out and do that. We were aware of it and prepared for it.”

Still in the first, tempers flared again after Nikita Kucherov drilled Evander Kane in front of the Lightning bench.

“When you typically think of the Oilers, it’s all skill,” Zach Hyman said. “We’ve got some grit to us now, which is a good thing.”

Linesman Travis Toomey appeared to suffer a cut to his left hand on the play and went quickly off the ice for treatment. As the period ended, Darnell Nurse and Corey Perry engaged in fisticuffs.

There was another fight at the start of the second with Klim Kostin squaring off with Maroon.

“I think he leads the way there,” McDavid said of Kostin’s physical presence.

“He wants that, and it’s been impressive to watch. He takes on a big man there… some teams come in and think they’re going to run us right out of the building with physicality, but we’ve got the guys to stand in there.”

Brandon Hagel got the Bolts to the board 1:30 in second.

Hyman provided a quick reply, banking a bad angle shot in off Andrei Vasilevsky. Steven Stamkos fired in a one-timer with a delayed penalty coming to the Oilers.

McDavid put the Oilers back in front 2:10 into the third, cutting in from the right side and forcing the puck behind Vasilevsky. Jack Campbell made a nifty glove save on Kucherov about a minute later. Hyman scored into an empty net with 2:12 left.

“We’ve talked about consistency for a long time, and unfortunately the spot we find ourselves in is one we’re familiar with — having to battle for our playoff lives — and we’ve got to start early,” McDavid said.

During the game, it was announced that Draisaitl and Stuart Skinner were selected for the NHL All-Star Weekend through a fan vote. McDavid had previously been selected. The Florida Panthers host the All-Star Game on Feb. 4.

The Oilers, 26-18-3, will visit the Vancouver Canucks on Saturday.