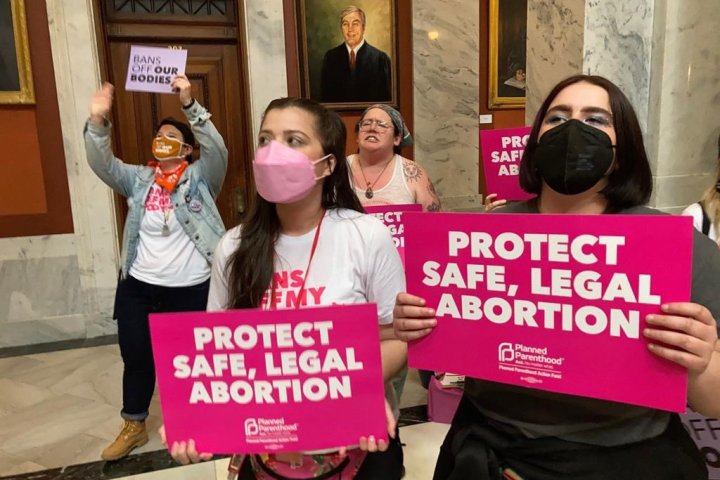 The U.S. Justice Department may have a strong argument in the Idaho case filed under federal health care law, but even if they win it wouldn’t allow full access to abortion there, legal experts said. It could, though, give doctors more latitude to provide an abortion in an emergency or a situation that could become one.

But Texas is already pushing back with another lawsuit over the same federal statute, arguing federal health-care law doesn’t allow for abortion-related care banned under state law.

Here’s a look at how the dueling cases could affect the fraught medical and legal landscape after the Supreme Court overturned the nationwide right to abortion:

The Emergency Medical Treatment and Labor Act, or EMTALA, went into effect in 1986 and was aimed at making sure people could get emergency care regardless of their ability to pay. It’s been at the center of court battles before.

In the 1992 case of “Baby K,” for example, a court sided with parents who said the federal law required a hospital to keep treating a baby born without a cerebral cortex, even though doctors said it would be medically futile and cited a state law in support, said Lindsay Wiley, a law professor and director of the Health Law and Policy Program at UCLA Law.

Hospitals that violate the emergency treatment act could lose access to payments from Medicare, a major blow.

The Idaho lawsuit comes after the U.S. Department of Health and Human Services issued similar guidance, saying hospitals must provide abortion services in emergencies or situations that could become emergencies.

Many abortion bans, including the law set to go into effect in Idaho, are written to allow abortions if a pregnant person’s life is at risk. But they don’t always say exactly what that means, and some doctors say the laws are so vague that it’s hard to know when the exceptions apply. Notably, Idaho’s exception is written so that it can only be used as a defense in a criminal trial, after the doctor has been charged.

The deep uncertainty and possible criminal charges against doctors have already had profound repercussions in reproductive medicine and other areas of medical care.

“The risk of criminal prosecution is one of the most extreme, most heavy handed things that law can do. It has a huge chilling effect,” Wiley said. “It’s not surprising that clinicians, if they were only focusing on state law, would be very hesitant to do what they’ve always done to provide standard of care.”

The federal emergency-medical treatment act, by contrast, has a wider definition of emergency care and stabilization, as well as a specific set of rules and policies developed over three decades.

Idaho Gov. Brad Little, a Republican, said the Supreme Court gave states the sole ability to regulate abortion and he would defend the law against federal overreach.

Federal law trumps state law under the U.S. Constitution, and that includes the federal emergency-care law, said Allison Hoffman, a law professor at the University of Pennsylvania Law School and expert on health-care law.

“That’s a pretty strong argument,” she said. “But I think that this case will get to the Supreme Court, and it’s really hard to predict what will happen when it gets there.”

James Blumstein, a health-care law expert at Vanderbilt University, said the emergency-care law tied to a federal spending program is fundamentally different from state abortion bans that carry criminal penalties. The federal law, meanwhile, applies mostly to hospitals while abortion bans are typically aimed at doctors. “I could not advise a doctor to violate state law under the circumstances,” he said in an email.

If the Justice Department wins, it would likely allow abortion care in a wider set of circumstances – but there would still likely be a big legal gray area for doctors and hospitals. “This is really squishy territory. What does it mean to have a condition so that the absence of immediate medical attention could be reasonably expected to result in placing the health of somebody in serious jeopardy?” Hoffman said.

Many other lawsuits are playing out in Idaho and the rest of the country over abortion. Democratic President Joe Biden is also taking other steps to allow people to keep getting abortions, including signing an executive order Wednesday aimed in part at make it easier for women to travel between states to get abortions.

Texas sued the federal government last month over the guidance from Department of Health and Human Services under the same federal law. The state argued the guidance disregards the state legislative process and leaves doctors and hospitals vulnerable to losing their licenses or being charged with crimes under state law.

Texas officials also argued that the administration wants to “transform every emergency room in the country into a walk-in abortion clinic” and the federal emergency care law should have doctors considering how to preserve “the life or health of an unborn child.”

A near-total abortion law enforced by the threat of civil lawsuits went into effect in Texas last year, and another law carrying criminal penalties is set to go effect in the coming weeks.

Those arguments could get traction with judges there, said Elizabeth Sepper, a professor at the University of Texas at Austin School of Law. If the Biden administration prevails, it would apply in an urgent but fairly narrow set of circumstances.

“EMTALA doesn’t create a right to treatment or a right to go around the abortion ban, but it will provide some reassurance to emergency room doctors,” she said.