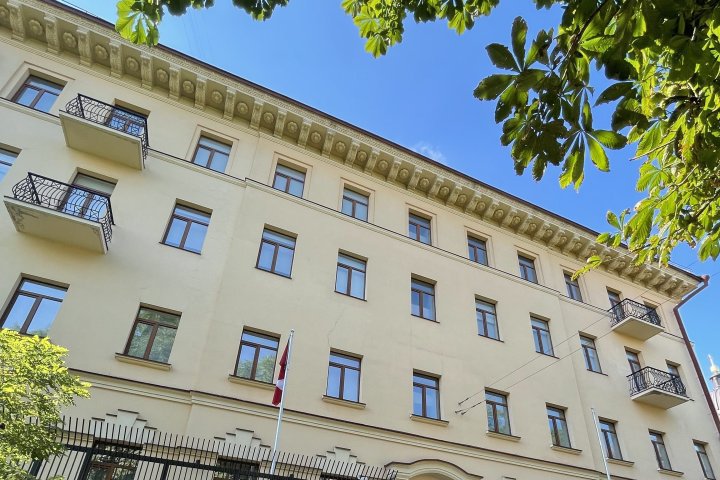 Tensions flared at the House of Commons foreign affairs committee on Thursday as Foreign Affairs Minister Melanie Joly was grilled over a report that Canada “abandoned” Ukrainian embassy staff as the Russian invasion loomed.

The report, which was published by the Globe and Mail on Tuesday, cited three sources who alleged that Global Affairs Canada received intelligence confirming Russia’s intention to wage war against Ukraine — and that Ukrainian staff at Western embassies were among those on likely Russian hit lists.

Despite that warning, the Globe report said Canadian embassy staff in the Ukrainian capital of Kyiv were told to keep that information from Ukrainian staff, who were not among those pulled out of the region when Canada moved diplomatic staff to neighbouring Poland ahead of the invasion.

Global News has not independently verified this reporting.

During Thursday’s committee, Joly found herself in the hot seat over the report.

Conservative MP Garnett Genuis accused Joly of issuing a “qualified denial” of the report, asking her to definitively share whether she believes the reporting to be correct.

“Their story was that Canadian embassy staff were likely on lists, and that the Five Eyes briefed Canadian officials that Ukrainians who work for Western embassies were likely on the list, and further that the Canadian embassy made a decision not to pass that information along. So, Minister, to be very clear, is the Globe and Mail story in your view, correct or not?”

Joly responded, but did not specify whether she believes the Globe and Mail story was correct.

Genuis repeated his question, pressing Joly on whether the Five Eyes — an intelligence alliance that includes Australia, Canada, New Zealand, the U.K., and the U.S. — provided a briefing to the Canadian embassy suggesting Ukrainian nationals working at Western embassies were “likely on the list,” as the Globe and Mail had reported.

“There were some lists specifically targeting … Ukrainian people in Ukraine, and of course, we were preoccupied with (this) targeting,” Joly replied.

This response sparked a back and forth between the two, which saw Joly and Genuis talking over one another for roughly 40 seconds straight, before the committee’s chair intervened.

The brief respite didn’t last long. Genuis began questioning Joly about whether Ukraine is Canada’s ally — to which she replied “of course.”

Unsatisfied with her response, Genuis repeated the question as Joly continued to speak.

“Is Ukraine part of the alliance, Minister?” he asked.

“You want me, Garnett, to answer your question or you want to cut me off every time, every single time?” Joly fired back.

“Ukraine is an ally,” she added, before the clock ran out on Genuis’ turn to ask questions.

The committee had originally gathered to discuss the Canadian government’s decision to allow a turbine to return to Germany and, eventually, to Russia for installation — a move that was only possible after the Liberals granted Siemens Energy an exemption from sanctions against Russia.

Ukraine has warned that the permit, which allows Siemens to import, repair and return up to six turbines for Gazprom, set a dangerous precedent and undermines the sanctions that nations have slapped on Russia in response to its invasion of Ukraine.

The turbine decision also proved a contentious topic for the committee. Conservative MP James Bezan accused the Canadian government of helping to put “more money” into “Putin’s war machine” with the decision.

In response, Natural Resources Minister Jonathan Wilkinson asked Bezan if the Conservative Party wouldn’t have sent the turbine — which he alleged could threaten multiple European countries’ ability to survive the winter.

Both the Canadian and German governments have been adamant that the turbines’ return was necessary. Speaking on Thursday, Joly explained that the move called President Vladimir Putin’s “bluff” since Russia was pointing to the delayed turbine delivery as a reason for reducing the flow of natural gas to Germany.

Ukrainian ambassador to Canada, Yulia Kovaliv, said Russia’s ability to fuel its war on Ukraine has been built mostly from oil and gas revenues.

“Our position from the very beginning was that the decision to provide the permit to Siemens turbines was a dangerous precedent that violates international solidarity,” Kovaliv said.

“This waiver is not a one-time decision. The maintenance of all six turbines in Canada will cement Russia’s ability for years ahead to weaponize energy and to derail the efforts to address climate change — and it will be done with Canada’s blessing.”

Since the turbine was returned to Germany, Russia has reduced natural gas supplies to the European country to 20 per cent.

Sabine Sparwasser, German ambassador to Canada, said Germany’s dependency on Russian gas imports stands at 26 per cent as of Thursday, compared to 56 per cent on Feb. 24.

“Our sanctions should impose economic cost on Russia but they must not harm us more than they harm Russian interest,” she said, speaking about the return of the turbine.

“We are in this for the long haul. We will support Ukraine for as long as it takes.”

— with files from Global News’ Irelyne Lavery & The Canadian Press