Could robots take your job? How automation is changing the future of work 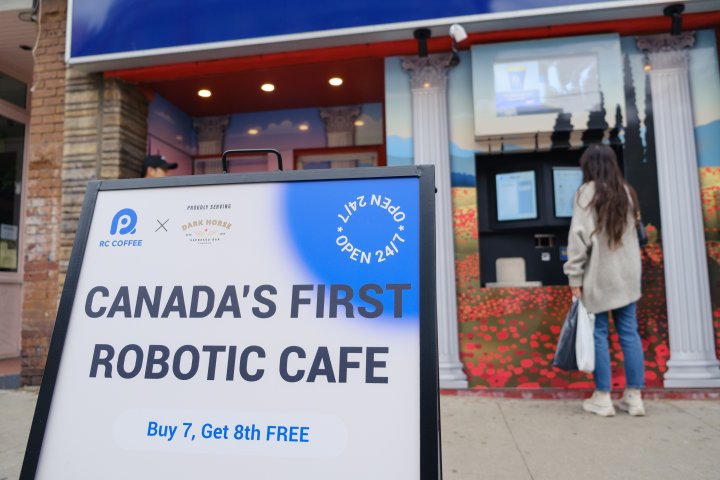 A precursor to our automated future sits inconspicuously off Baldwin Street in Toronto’s busy Kensington Market.

The RC Coffee Robo Cafe, which juts out slightly from the brick wall by the sidewalk, bills itself as Canada’s first robotic café.

As opposed to a vending-machine brew that dispenses coffee from hand-filled urns, the robotic barista makes each cup of coffee, espresso, latte and more by request, ready in just a few moments.

For Jasmine Arnold, visiting Toronto from Providence, R.I., the iced matcha prepared at RC Coffee topped drinks dispensed by a vending machine and was on par with coffee served at a chain.

While the drink went down smooth, she told Global News the experience was unique if a little jarring.

“I have mixed feelings about a robot, from a jobs perspective,” she said, expressing some discomfort about what this means for the prospects of human baristas.

After trying his own robo-poured beverage, Arnold’s partner Eric echoed her sentiments but noted that with the pandemic changing our expectations of what work can be done from where, it seemed to align with recent shifts in work.

“I think this is kind of where we’re going as a society,” he said.

Workforce shifts driven by a tight labour market and the COVID-19 pandemic are opening the door to a faster adoption of automated solutions, but at least one expert is warning that Canada might not be prepared for how quickly robotic workers are set to transform the economy.

Statistics Canada said Friday that though Canada shed some 31,000 jobs in July, the country’s unemployment rate remained at its lowest ever at 4.9 per cent last month. The labour market is even hotter in the U.S., with unemployment falling to 3.5 per cent in July.

This tight North American job market is driving up interest in automated solutions, says Brad Ford, vice-president of sales for KioCafé in Canada, the company that operates RC Coffee.

The company had just one RC Coffee kiosk in Toronto in the fall of 2020, which it had launched as an “experiment,” he recalls. But in the past two and a half years, it’s scaled up to five locations across the Greater Toronto Area with three more on the way.

Most storefront locations are in high-traffic neighbourhoods, but there’s also a standalone RC Coffee kiosk in the Toronto General Hospital.

Hospitals, universities and airports have been among Kio Cafe’s most interested customers, Ford says, as these locations have been unable to staff their coffee shops quickly enough to accommodate the surge in demand from the pandemic recovery.

“People have been knocking at our door trying to buy the equipment from us, especially in the U.S., where they just cannot get the staff to open up the locations,” he says.

Companies in other sectors are also increasingly embracing automation. Beyond just installing self-checkout systems, grocers like Loblaw and Sobeys are turning to robotics to speed up fulfilment. The company announced plans in June to open an automated distribution centre in the GTA by early 2024.

The Association for Advancing Automation said that U.S. workplace orders for robots were up 40 per cent in the first quarter of 2022. That followed a record 2021 that saw a 28 per cent jump in orders fueled by non-automotive sectors.

While it was “coincidental” that RC Coffee offered a touch-free experience just as the pandemic was getting underway, Ford notes this has also been an in-demand upside.

The pace of automation has only been accelerated by the COVID-19 pandemic, says Dan Ciuriak, senior fellow with the Center for International Governance Innovation in Waterloo, Ont.

He points to the 2020 Beijing Olympics (held in 2021), when China ramped up development of contactless services to reduce opportunities for COVID transmission, as a hint at what to expect our post-pandemic realities to become.

Amid a widely reported health-care staffing shortage, more than one in five Canadian nurses worked paid overtime shifts in July, Statistics Canada reported Friday. Some 11.2 per cent of nurses were meanwhile off sick for part of the week when the labour force survey was conducted.

Ciuriak says that there’s an opportunity for increasingly intelligent robots to support or even replace some nursing jobs as Canada’s ageing population threatens to overwhelm an already stressed health system.

“That is going to be a great boon and will enable us to actually get through this demographic transition,” he says.

This is largely what futurists — Ciuriak included, he notes — had long expected our automated future to look like: robots working side-by-side with humans, streamlining simple tasks and making us more productive.

But developments in artificial intelligence are seeing more powerful chips accelerate the pace of automation, he says. Each time a machine surpasses a human in a knowledge-based field, such as Google’s DeepMind AI mastering chess, Ciuriak says we should consider the implications for work we long assumed was solely meant for humans.

“You’re seeing just tremendous scaling up of the power of these networks. And that is being reflected in how many artificial intelligence systems are breaking through human benchmarks. This is now a regular phenomenon,” he says.

“We’re at the dawn of a new era, and that’s going to have massive implications for the labour market.”

The services sector in particular is rife for disruption, Ciuriak says, and it’s not just entry-level positions at risk.

He argues, for example, that skills a person might gain from years of investment and studying toward a law degree could be largely replicated — and mass-produced — on a computer chip within the next decade.

When these services, typically constrained by human limits, become scaled up through automation, the implications for income generation and distribution will be immense. The owners of these machines would become new centres for wealth concentration, he argues, warranting a shift in thinking about how we tax the products of this work.

“We are embarking into a new type of economy that we’re not prepared to regulate or manage,” Ciuriak says.

While he doesn’t believe that RC Coffee Robo Cafes will ever replace the traditional barista or communal feel of the local coffee shop, Ford does acknowledge some “front-line” jobs could be at risk in our automated future.

By enabling more coffee shop locations to open today rather than shuttering due to staff shortages, Ford argues that java producers are able to keep their businesses running and maintain employment throughout the coffee supply chain.

“The more that we can roll these things out and get great coffee out there, I think it’s great for everybody.”