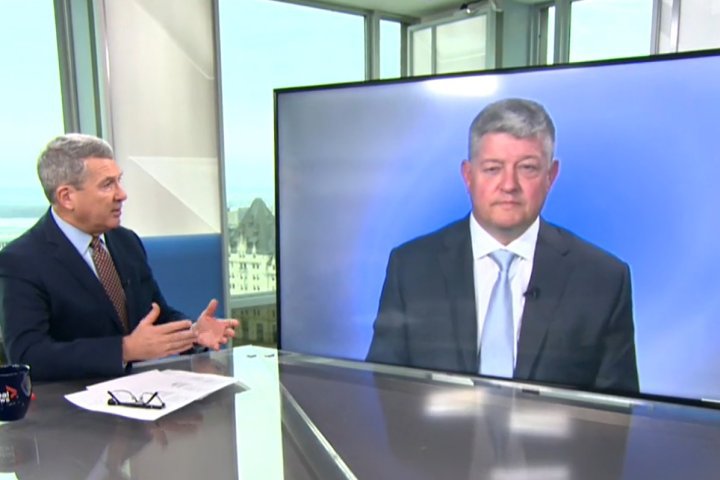 And he said the Conservatives should do that even if it risks further ire from Beijing, which he believes intervened in the 2021 federal election to hurt the party’s chances in key ridings.

“It’s not just that Conservatives were targeted, our very democracy was targeted,” Aitchison said in an interview with Global News Tuesday.

“So even if it was a Liberal that was targeted, that’s wrong. We’ve got to stand up against that.”

Aitchison was responding to comments from former Conservative leader Erin O’Toole, who recently suggested that the party’s election post-mortem found Conservatives in eight ridings were the target of foreign influence campaigns, allegedly from China’s communist regime.

Citing a confidential source close to O’Toole, Global News reported in December 2021 that the party believed foreign influence played a role in as many as 13 ridings.

The Conservative Party has not released evidence to back up the claims, but has said Canada’s security agencies – including the Canadian Security Intelligence Service (CSIS) – were aware of the activity. Under the government’s attempted safeguards for federal elections, established ahead of the 2019 general election, security agencies can alert the public if they are concerned foreign influence campaigns are sufficiently serious to affect the results of the election.

In a December statement, CSIS told Global News the security community did not detect threats that rose to the level of jeopardizing a “free and fair election.”

Aitchison agreed that establishing formal diplomatic relations brings risks. Beijing views Taiwan as a Chinese province, a view that is not shared by the democratically elected government in Taipei.

The Conservative leadership hopeful also acknowledged that successive Canadian governments – including the former Conservative government under Stephen Harper – have attempted to improve trade relations with the world’s second-largest economy, despite concerns over China’s human rights abuses and increasing belligerence on the world stage.

Aitchison voiced approval for the balance he believes two former prime ministers – Jean Chretien and Brian Mulroney – had in navigating the relationship.

“Trade is one of the things that, particularly in terms of the quantities of things like canola, that the Chinese economy, that people need,” Aitchison said.

“I don’t think it’s possible for China to completely shut out the world, because they need what the world has.”

Aitchison has struggled to get much oxygen in the party’s leadership race, dominated by the pugilistic Pierre Poilievre and former Quebec premier Jean Charest. But the Muskoka–Parry Sound MP has presented himself as a unifying figure and urged his leadership rivals to treat each other with respect.

It’s not clear how that message is landing with Conservative members, but it doesn’t appear to have convinced his fellow candidates.

Aitchison admitted that whoever is selected Conservative leader on Sept. 10 will have a serious challenge on their hands with keeping the party together.

“I’m not sure if I can quantify how difficult it will be. I think I would just agree that it will be difficult,” Aitchison said, adding that caucus management has to be “job number one” for the next leader.

“Unity does not mean uniformity. It does mean listening to each other. It does mean hearing each other out, not that we’re always going to agree. We have to find that common ground, (and) that takes work and energy and time and it doesn’t happen overnight.… (It’s) a choice you make every single day.”