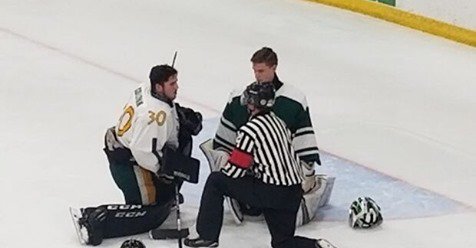 The hockey world seems bereft of feel-good stories of late, but a bit of sportsmanship in St. Stephen over the weekend is helping fill the void.

The visiting Southern Victoria High School Vikings were in town Saturday to face the St. Stephen Spartans, but the home team found itself at a major disadvantage.

Head coach Don MacCallum said they lost their goaltender to injury and senior player Davan Cloney volunteered to strap on the pads.

But the switch from skater to goalie is far from easy. It requires an entirely different set of fundamentals, and this was Cloney's first attempt.

"He's a defenceman for us. And sliding into a position that you have not trained at, the skill set is so much different as far as how you stand positionally. How you go down to the surface to butterfly and make saves. How you cover your angles," MacCallum told Maritime Noon.

As can be expected, it was an awkward beginning for Cloney. But he got support from an unlikely source.

'He's clearly a kind soul'
At the end of the period, Vikings netminder T.J. Sullivan didn't join his team in heading off the ice. Instead, he skated to the other goal and took a knee next to Cloney and shared some pointers.

"He made a choice to go down there and help our guy," MacCallum said. "He's clearly a kind soul."

The "classy" act drew cheers from the crowd, but Sullivan's support didn't end there, MacCallum said.

Struck by tragedy, small N.B. town to host Habs, Panthers in Hockeyville celebration
"Every time Davan made a save, T.J. is at the other end, slapping his stick, encouraging him," he said.

The final score was 11-0 in favour of the visitors, but that was of little concern.

The players and fans alike were thinking of the teammate who stuck his neck out to help his squad and the thoughtfulness of an opposing player.

MacCallum said it was a "100 per cent positive experience on both ends of the ice."