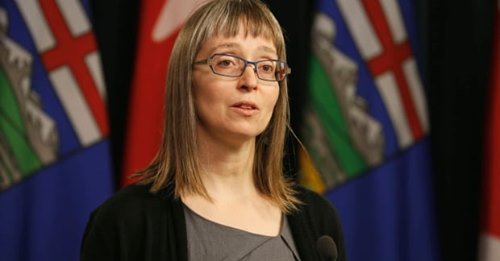 Alberta public health and agriculture officials are investigating after the first case in Canada of a rare swine flu variant was detected last month in a central Alberta patient.

The case is only the 27th in the world since 2005, Chief Medical Officer of Health Dr. Deena Hinshaw said in a joint statement Wednesday with Dr. Keith Lehman, chief provincial veterinarian.

"A confirmed case of variant Influenza A (H1N2)v has been detected in central Alberta," Hinshaw and Lehman said in the statement.

"This currently appears to be one isolated case and there is no increased risk to Albertans at this time. This is the only influenza case reported in Alberta so far this flu season."

At a news conference Wednesday, Hinshaw said the virus was detected in mid-October when a patient with influenza-like symptoms sought medical treatment at a hospital emergency department.

"We are taking this seriously, as any human infection with a non-seasonal influenza virus needs to be followed up under our international obligations," she said.

A sample collected from the patient was tested for influenza and for COVID-19 as part of a routine process, Hinshaw said.

"In this particular case there was nothing about the presentation or the history that indicated any different concern than anyone else presenting with an upper respiratory tract type infection — influenza-like illness symptoms," she said.

"As part of our typical lab process, whenever we get an influenza positive, especially early in the season, part of the process is to move through into a typing, to understand what type it is, and as a part of that process it was identified that it was a non-seasonal strain."

The patient followed through with a recommendation to stay home for 10 days, Hinshaw said.

The province said it will continue working closely with Alberta Health Services, the Public Health Agency of Canada and other partners across Canada.

Hinshaw said central Alberta COVID-19 samples from the past two weeks are being tested retrospectively for influenza. That testing is almost complete and no influenza-positive samples have been found, she said.

"Starting today, AHS will also proactively offer influenza testing to residents of parts of central Alberta if they are presenting for COVID-19 testing at an AHS testing centre," Hinshaw said. "This testing will be optional and supports our ongoing influenza surveillance in the region."

Variant Influenza A (H1N2) is rare,with only 27 cases reported globally since 2005, and no cases in Canada prior to this one, Hinshaw and Lehman said in their statement.

Hinshaw told the news conference it is "quite rare" to see transmission of the illness from humans to animals or from animals to humans. With biosecurity measures in place, there is "very limited opportunity for influenza from swine to transmit to humans," she said.

The majority of cases reported in the last decade have been in the United States. Those cases have been "very mild and self-limiting," Hinshaw said.

H1N2 is not a food-related illness and is not transmissible to people through pork meat or other products that come from pigs. There is no risk associated with eating pork, Hinshaw said.

She said no links have been found between the influenza case and any slaughterhouses.

Lehman told the news conference it isn't unusual to see influenza in Alberta swine populations. He said the province sees between 10 and 30 cases per quarter, or between 40 and 120 cases each year.

He said it is not uncommon for the illness to be in a herd without any signs of clinical disease. When it does show up it is typically mild, he said. CBC