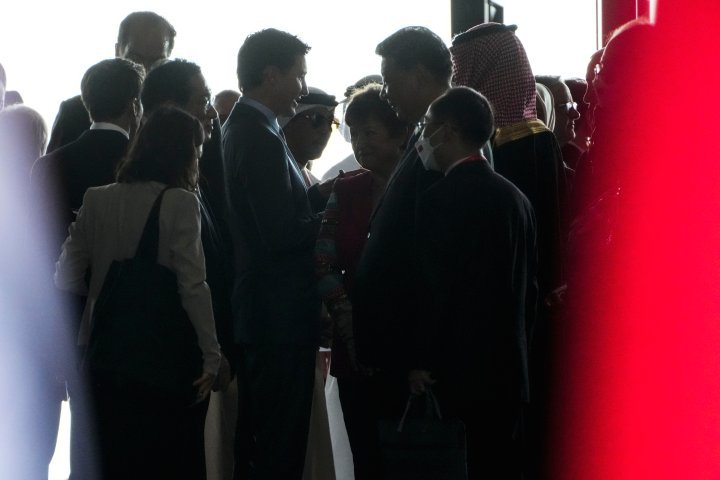 Canada must keep its “eyes wide open” amid allegations of Chinese interference in the 2019 election, Innovation Minister Francois-Philipe Champagne said on Wednesday.

His comment comes just hours after Chinese President Xi Jinping confronted Prime Minister Justin Trudeau on the sidelines of the G20 summit, scolding the Canadian leader for sharing with the media details of a brief conversation the two had held.

Champagne’s comment also comes on the heels of Global News reporting last week that Canadian intelligence officials had warned Trudeau that China has allegedly been targeting Canada with a vast campaign of foreign interference.

That campaign, officials added, reportedly included funding a clandestine network of at least 11 federal candidates running in the 2019 election.

“We’ll have to look into that and get to the bottom of this,” Champagne told reporters on Wednesday as he walked into a Liberal caucus meeting in Ottawa.

“There’ll be, certainly, measures to be taken to make sure that this doesn’t happen again, and I think the bottom line of that is more vigilance.”

Champagne said Canada isn’t the only country facing issues with alleged election meddling, though he did not expand on the statement nor specify what other countries he was referring to.

“I think we need to interact with eyes wide open. That’s what I would say,” he added.

On Tuesday, a senior government source told Global News that Trudeau raised the war in Ukraine, North Korea and alleged Chinese interference in Canadian elections with Xi when the two spoke for roughly 10 minutes.

Foreign Affairs Minister Melanie Joly also confirmed that she discussed the same topics with her Chinese counterpart this week.

Despite it being standard practice for media to receive notes from the prime minister’s office on the key topics discussed when Trudeau meets world leaders, Xi appeared frustrated that their conversation ended up in the headlines.

“Everything we discuss has been leaked to the paper, that’s not appropriate,” Xi told Trudeau Wednesday through a translator, at the closing session of the G20.

Trudeau interrupted Xi’s translator, saying: “We believe in free and open and frank dialogue and that is what we will continue to have. We will continue to look to work constructively together but there will be things we will disagree on.”

Champagne said he was “pleased” to see the prime minister was “standing up, as he always does, for Canada.”

Meanwhile, multiple members of Parliament have raised their concerns about the allegations that China covertly funded 2019 election candidates in an attempted campaign of foreign influence. The procedure and House affairs committee voted on Monday to dedicate four meetings to studying the report, inviting multiple security and elections officials to testify before them on the matter.

“The briefings from CSIS are alarming in terms of the sophisticated campaign by the Chinese communist regime to subvert Canadian democracy,” said Conservative MP Michael Cooper, who tabled the motion on Monday.

“This interference is simply intolerable. It is unacceptable. Canadians and Canadians alone ought to decide the outcomes of elections, free of foreign interference.”

Canada has also been striking a new tone on China in recent days. Speaking last week, Joly assured Canadians the government “will do more to tackle foreign interference.”

In the same speech, she levied some of her sharpest criticisms of the Chinese regime to date — and warned Canadians of the “risks” involved in doing business in and around China.

“It seeks to shape the global environment into one that is more permissive for interests and values that increasingly depart from ours.”

Her rebuke came just days before she and Trudeau departed on a 10-day trip to the Indo-Pacific region, where the Canadian government has been meeting with leaders from around the world — including Xi — and working to shore up friendships with China’s neighbours.

“To put it plainly: the decisions made in the region will impact Canadian lives for generations,” Joly said.

“We must be at the table, step up our game and increase our influence.”

— with files from Global News’ Mackenzie Gray and Sam Cooper