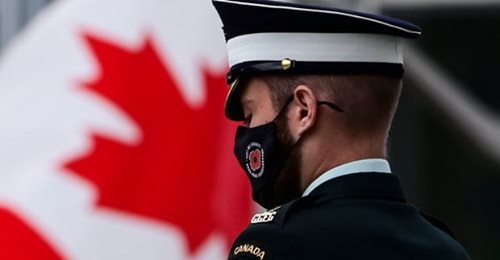 The boom of a gun rang out in the sky above Ottawa at 11 a.m. ET to mark the start of a moment of silence, but the tens of thousands of people who normally gather to mark Remembrance Day in the nation's capital weren't there in person to hear it.

Instead, a much smaller crowd of a hundred or so dignitaries, active service members, veterans and members of the public gathered at the National War Memorial while Canadians across the country tuned in to the ceremony online or on TV.

One of those who made it out was Bill Black, a veteran who served on the HCMS Cayuga for two years during the Korean War.

"That's when I go back in time and think about our men who served in the Second World War and our losses in Korea," said Black of the annual moment of silence. "I'm thinking about our soldiers, sailors and airmen who served."

The scaled-down ceremony in Ottawa reflected the need to avoid large gatherings because of concerns over the spread of COVID-19.

The ceremony featured some traditional elements — including the playing of the Last Post and the ceremonial laying of wreaths at the foot of the memorial — while others were cancelled or scaled back. 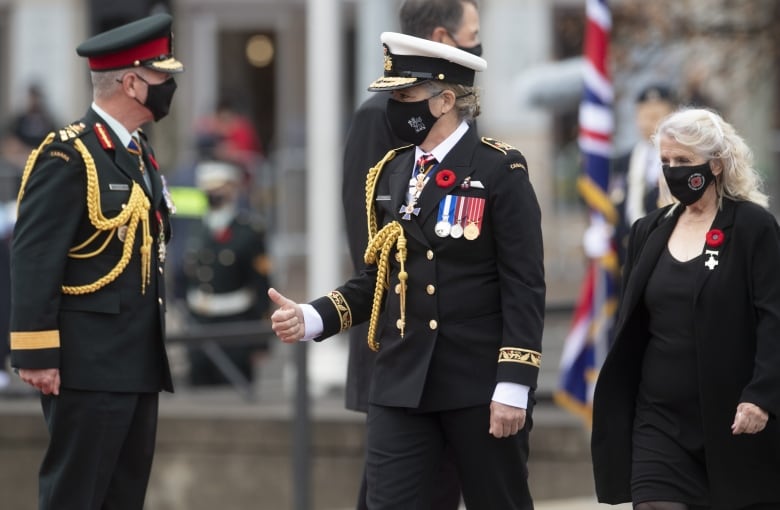 There were no crowds of flag-waving spectators, no parade of veterans and dozens of wreaths were pre-placed in a bid to reduce the number of participants in the ceremony.

Instead, a small parade of military band members marched down Elgin St. and a lone singer from the Ottawa Children's choir sang O Canada instead of the usual chorus of voices from  the choir that sing the national anthem.

A planned flypast of military aircraft was cancelled because of inclement weather.

"It's incredibly important that no matter what is going on we remember our veterans, we remember this moment, we have that moment of silence," said Gen. Jonathan Vance, the country's top military commander.

"It's comforting to people that we can still do some of these normal, important national moments even though there's a pandemic."

Maj.-Gen. Guy Chapdelaine, a Roman Catholic priest and chaplain general of the Canadian Armed Forces, in remarks to those gathered, nodded to the deployment earlier this year of Canadian military personnel to long-term care homes in Quebec and Ontario with severe COVID-19 outbreaks.

"On this day when so much has changed since the last time we gathered, may we be comforted by the words from Her Majesty the Queen to Canadians in the context of this pandemic," said Chapdelaine, as a 21-gun salute rang out behind him.

"Hope is to be found in the care given to the vulnerable and to those in need," he said, repeating the message twice.

75th anniversary of the end of WW II
Most observances of Canada's wartime sacrifices across the country are expected to be extremely small after the Royal Canadian Legion explicitly discouraged Canadians from attending Remembrance Day ceremonies. Around 30,000 people normally turn out for the national ceremony.

There was a special emphasis on the 75th anniversary of the end of the Second World War after many commemorations planned for earlier this year in Europe and elsewhere were cancelled because of the pandemic.

"It's completely against what we [normally] want ... but this year is a completely different situation. Everybody's health is in jeopardy being in close quarters. We don't want any sort of spread of the disease due to this particular remembrance ceremony," said Danny Martin, who organized the ceremony in Ottawa. 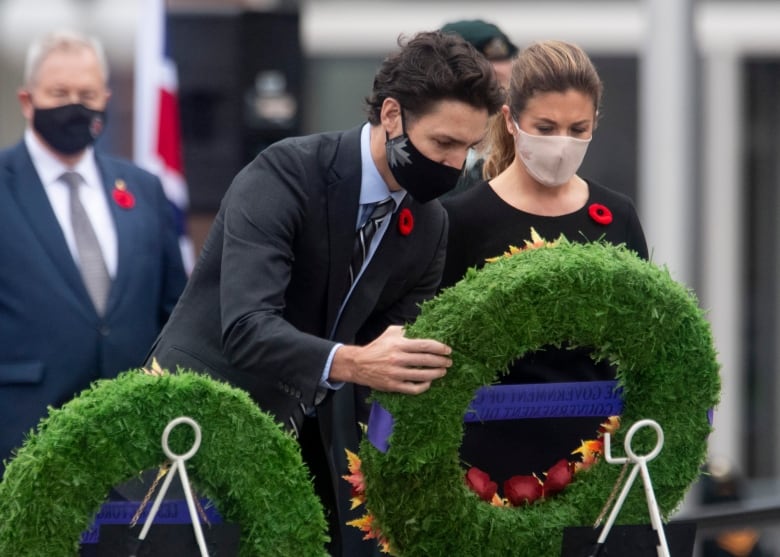 Prime Minister Justin Trudeau arrived at the National War Memorial Wednesday morning, along with his wife, Sophie Gregoire Trudeau. Both wore masks, as did others in attendance.

Sullivan's son, Chris Saunders, was a naval officer who was killed after a fire broke out on HMCS Chicoutimi, a submarine that was on its way to Canada in October 2004.

In a touching moment following the national ceremony, Sullivan met retired master cpl. James Sookhbirsingh from London, Ont. — who served on the same submarine with her son — and he showed her a plaque he keeps on his motorcycle that reads "I ride in memory of Chris Saunders." Sullivan was visibly emotional after the exchange.

"He was one of the good ones," Sookhbirsingh said of Saunders. "I've never heard anyone say anything bad about him."

Subdued ceremonies across Canada
Ontario Premier Doug Ford and a small group of dignitaries and members of the military attended a service at Queen's Park in Toronto. The service paid tribute to the sacrifice of all veterans but also featured the unveiling of a new memorial to those who served in Afghanistan.

A small crowd also gathered in front of the cenotaph at Toronto's Old City Hall, the 100th anniversary of the Remembrance Day tradition in Canada's largest city.

In Montreal, there was also no parade, no marching, and the reveille was played on a portable speaker. But for veterans, the small Remembrance Day ceremony at the cenotaph remained moving.

"It's the first time all my fellow brothers and sisters aren't here with me," said William Howe, a veteran who served with the Black Watch and Royal Canadian Regiment.

"It's not easy, I wish they were here. I lost friends overseas, so not having friends here with me doesn't help matters much."

In Halifax, the ceremony at the Grand Parade in the city's core was reduced to a small audience of 22 guests seated in front of the cenotaph.

A modest crowd gathered around the National War Memorial in St. John's Wednesday morning. They lifted their heads following two minutes of silence as a Cormorant helicopter soared over the harbour and the memorial below.

Residents of St. John's were asked to observe the 11 a.m. Remembrance Day moment of silence from their doorways this year, to keep safe in the global pandemic. Still, about 100 onlookers gathered along Water and Duckworth Streets by the memorial to pay their respects to soldiers lost in war. They wore masks as they bowed their heads, distanced from each other.

Derek Windsor attended with a picture of his father, Harold, in hand. Harold Windsor served for three years in the Korean War and passed away in 2011 at the age of 79.

"I know social distancing is important but I really felt it important to remember him today," said Windsor. "I really hope that we're able to get back to some sort of normal ... It's really important that we're here as a group of citizens to make sure that we remember."CBC