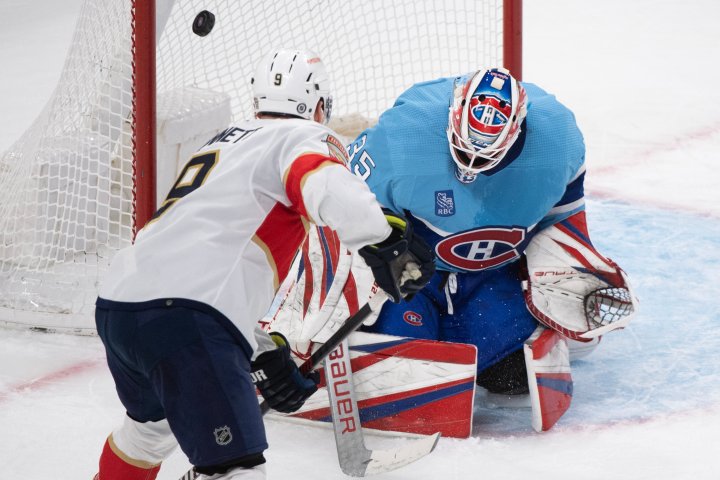 The injuries are piling up, yet the Montreal Canadiens played one of their best games of the season on Tuesday night, handling the powerhouse Winnipeg Jets with ease.

On Thursday night, the Florida Panthers ended that good feeling with a 6-2 drubbing of the Canadiens.

In a game with this score line, it’s difficult to point to excellence for the Canadiens, but there are some moments that stand out. One in particular was from Jesse Ylonen who is trying to elevate his game to the NHL level all season long, instead of a cup of coffee during injury season.

Ylonen got a little power play time, and what a pass he made during it. It was so foreign to see this pass. It has barely happened one time all season, this particular pass. Ylonen threaded it through two players to create a magnificent scoring chance. It’s so hard to break down the middle lane from the half wall, and Ylonen made it look easy.

Cole Caufield also had two opportunities to score, and both looked like goals when he shot them. On the second period shot, someone named Alex Lyon, with all of 24 games experience at the NHL level at the age of 30, dove across the crease like a shortstop and threw his arm out to make the remarkable stop.

In the first two periods, Josh Anderson showed great speed and had a couple of clean looks, but he was thwarted by his own breaking stick on his best chance from two feet. Finally, in the third, Anderson scored on a terrific pass from Rem Pitlick. He had a strong game adding a goal as well.

Evgenii Dadonov is playing strong hockey for a while now as his care meter seems to have risen to the “I’d like my career to continue” level. Nick Suzuki had a couple of big hits, including meeting up with Radio Gudas and dropping him. Kirby Dach showed his usual strength on rushes and entries backing up defenders and winning the zone easily.

There were some good performances, and a lot of chances, but Lyon was playing his first game of the season, and sometimes the hockey gods have a story to write, too. Their story was a win for the journeyman replacing an injured Sergei Bobrovsky.

They did the opposite. They came out with a lot of energy. The pride to put on the jersey and compete whether they had the talent or not to win the game was clear.

Arber Xhekaj was planted into the boards with a dirty hit in the second period, and the club just was not going to stand for it in the third. There were three fights with Mike Matheson, Michael Pezzetta and Xhekaj all getting involved. Xjekaj, once again, didn’t just win his fight, but destroyed Givani Smith.

Xhekaj seems to concuss a player every time he drops the gloves, and it might just be a great idea to not take him on anymore.

The Canadiens showed pride. They didn’t win, but they didn’t fold. Development for a head coach is many things, and for Martin St. Louis it was clearly a speech in the second intermission that had as a theme ‘we don’t get embarrassed in our own building without a fight’.

This was an unusual game. Both teams had excellent chances 5-on-5. Both teams were excellent on the rush. Both teams had a ton of strong offensive zone time. However, only one team had good special teams on a night when the referees simply called too much.

There were so many penalties for such minor infractions: A stick is slapped out of a hand; a tap on the back created another power play and a submission by the Academy for an Oscar; interference where the offending player simply had the opposition skate right into him.

Ironically, the worst infraction of the entire night didn’t get called at all. Mike Matheson levelled a ferocious reverse hit that Eric Stall was not expecting at all. Stall had to leave the game because it appeared that he might have suffered a concussion.  If anything was interference, it was Matheson’s unnecessary hit.

Montreal didn’t play that poorly a game, but when you put zero on the board on the power play, and your opponent is massively superior with theirs scoring four times, this is simply a game you’re not going to win.

In fact, having the second worst power play in the league and 10th worst penalty kill means Montreal has to be superior at even strength to have a chance most nights.

In years to come, this has to be figured out. For now, with the playoffs out of reach, and the club rebuilding, there’s not much consternation about this. One day, though, it has to be much better than this.

Montreal being down often 2-0 on special teams each game means at even strength they have to win it 3-0. That’s a tall ask.

Kent Hughes spoke to the media on Wednesday afternoon on the one-year anniversary of his hiring as general manager of the Montreal Canadiens. Once again, it was a half hour of wisdom from an outstanding hockey mind.

Hughes laid out his thoughts for the future of the organization, and there were many that were interesting and informed the future.

On the upcoming draft, it was fascinating to hear Hughes speak so openly about the team’s positioning to get a player that can mean a difference to the long-term fortunes of the club. Hughes detailed that the club doesn’t want to lose too much to affect morale and the development, but added the club doesn’t want too win too much, either.

It was refreshing to hear that Hughes knows that too many wins is not good for the draft position. Now, this is obvious to all of us, but to hear someone speak of it in such stark and honest terms is an honesty we don’t often get.

This is a valuable sentence to hear because though he did not say openly who he is going to try to move at the trading deadline, it means he wants to move players out so he can acquire more first-round draft picks.

Hughes was also asked about the progress of Juraj Slafkovsky. Hughes indicated that there is no blue print on where a player should spend his first year, but that everyone is different. The organization felt that Slafkovsky was better suited to the NHL to learn in the top-tier environment with the best teachers available.

In this instance, he sees the value of development instructor Adam Nicolas and head coach Martin St. Louis. No one will argue with him on their value, but perhaps the on-ice game development is even more important than the esoteric development that St. Louis and Nicolas provide. That debate will go on for years.

Another interesting note was on Kirby Dach who is having a breakout season. Hughes indicated, most importantly, that he saw Dach as a centre for the team in years to come. This is excellent because Dach has the exact profile of a strong centre with beautiful zone exits, and possession on the entries as well. He reads the play beautifully and only has to improve his face-off statistics. Dach is a classic centre.

The final strong statement that he made was on goalie Samuel Montembeault, who is having the best run of his career with a 946 save percentage in his last five games. Hughes indicated that Montembeault should be in Montreal for years to come.

Goalies take long to develop, and it is nearly impossible to know year-to-year which ones are going to keep excelling. They are voodoo. For every Carey Price who maintains excellence over an entire career there is a Jordan Binnington, Jack Campbell, and Matt Murray who one year are outstanding, but the next year, they can’t figure anything out.

When a goalie can do .945, make sure he gets a chance to see if he can sustain something even at 915, because he’s got a spot guaranteed in any organization. At only 26 years of age, Montembeault has earned a longer look, and Hughes is 100 per cent behind that.

All in all, it is wonderful to hear Hughes speak. He treats everyone with dignity, and even if the question is long-winded or not that bright, he finds a way to answer it with respect. He’s a man comfortable in his own skin, and certain of his talents and mind.

These are people that when they are in the trenches in a trade battling it out with another GM, they have the ability to remain even tempered and logical. They are the winners, and it’s excellent to see the Canadiens have made such a solid choice at GM.

Brian Wilde, a Montreal-based sports writer, brings you Call of the Wilde on globalnews.ca after each Canadiens game.