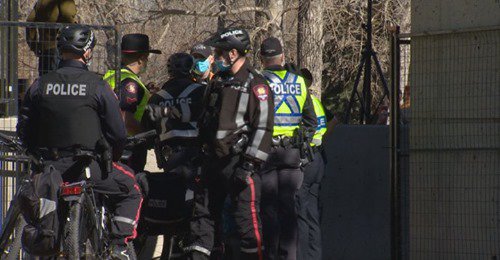 Hate crimes were up in Calgary in 2020, according to preliminary data from the city’s police force.

“Our initial review of data indicates that the volume of a crime has increased from our previous year, and crimes motivated by race, ethnicity — specifically Asian and Black communities — has increased,” Rebecca Davidson told the Calgary Police Commission Tuesday.

Calgary has notched more hate crimes per 100,000 people than Edmonton since 2017.

Hate crimes investigator Craig Collins said the Calgary Police Service is narrowing in on a suspect in the incident of a Confederate flag being flown in Union Cemetery.

“The criminal offence involved in this would be the theft and removal of the original flag, and the replacing and firing up the Confederate flag is not an offence per se but does speak to the motivation behind the person that raised that flag,” he said.

Collins commented on the racially motivated assault on March 21 that saw a young woman assaulted and her hijab torn.

“We established that, prior to that altercation, the victim was likely targeted because she was wearing a hijab whereas her cousin wasn’t during the offence of the assault,” Collins said.

But Collins said that assault was unrelated to “anti-lockdown” protests on Prince’s Island Park over the weekend.

“We are intimately aware of the underreporting of these kinds of incidents, which is why we’re taking a proactive approach in the role of Craig (Collins) and his team,” Supt. Asif Rashid said.

Rashid said CPS is starting monthly meetings with the city’s Asian community to address concerns and fears from reports of anti-Asian racism.

The hate crime investigator said CPS members, including the diversity resources team, are encouraging the city’s Asian community to report all racist incidents to them.

Incitement of hatred
CPS Chief Mark Neufeld confirmed that one of the anti-lockdown protests at Prince’s Island Park over the weekend saw CPS members pull down fencing the city put up around the stage at the park, allowing hundreds of protesters to occupy the space.

Neufeld said protest organizers were on site before officers and got behind the fencing to conduct the protest without a permit from the city. Police anticipated attendance at around 150-200, but when 800 people showed up, officers made the decision to allow them into that space.

“It made more sense in the moment to allow them to have that space, notwithstanding that earlier decision by the city,” Neufeld told commissioner and Ward 9 Coun. Gian-Carlo Carra.

“That decision is an operational decision that was made at the time, which, frankly, incident commanders have to have the ability to make.”

Neufeld said those events factored into the CPS after-action report, and his officers are looking into whether bylaw-related charges can be laid against those who trespassed behind city fences.

Collins said he witnessed anti-Muslim and anti-Francophone chants at an anti-lockdown protest. The hate crime investigator said police do not need the attorney general’s consent to lay public incitement of hatred charges under section 319(1) of the Criminal Code, as long as officers have evidence of such chants.

Collins said if such speech led to a group mobilizing to commit further crimes following hateful chants or speeches — like when Gaston led the townspeople to confront the Beast — that would likely meet the threshold to be able to arrest and lay public incitement of hatred charges.globalnews