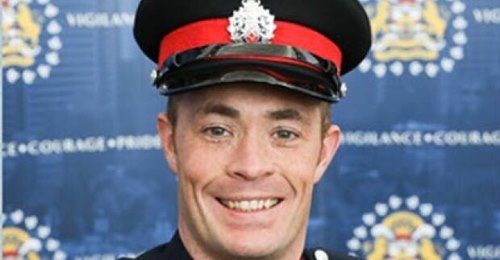 Calgary police say Sgt. Andrew Harnett was killed on New Year's Eve after being struck by the vehicle of a driver trying to flee a traffic stop.

The Calgary Police Service said the incident occurred around 10:50 p.m. Thursday in the area of Falconridge Boulevard and Falconridge Drive N.E.

"During the traffic stop, the vehicle fled, striking the officer in the process," police said in a statement.

Nearby officers rushed to the struck officer's aid as quickly as possible, and were joined by paramedics.

Despite desperate attempts by his colleagues, and members of EMS, he died as a result of his injuries" in hospital around midnight, the statement said.

The search for the driver of the vehicle continues.

"There is a massive effort underway to locate and bring to justice those responsible for taking the life of one of our members," reads an update from police issued Friday morning.

"Dozens of sworn and civilian members are working around the clock tracking down each and every lead and these efforts will not stop."

Harnett, 37, joined the service 12 years ago after serving as a military police officer and was promoted to sergeant in 2019.

"The profound grief this has brought to all members of the Calgary Police Service and their families is unmeasurable."CBC