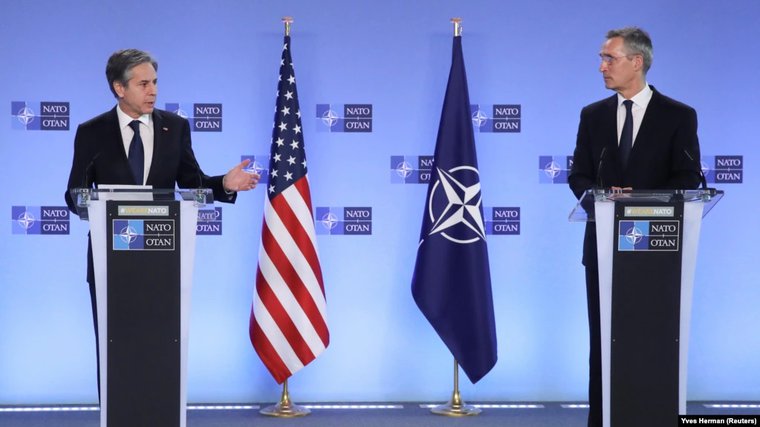 U.S. Secretary of State Antony Blinken says the Nord Stream 2 pipeline being built from Russia to Germany is against the European Union's own interests and warned Berlin of possible sanctions over the project.

"President (Joe) Biden has been very clear, he believes the pipeline is a bad idea, bad for Europe, bad for the United States, ultimately it is in contradiction to the EU's own security goals," Blinken said on March 23 as he met with NATO Secretary-General Jens Stoltenberg in Brussels.

Germany is pushing for the pipeline's completion despite sustained U.S. opposition for over more than a decade.

U.S. officials argue that the pipeline, which is intended to transport 55 billion cubic meters of natural gas annually directly from Russia to Germany across the Baltic Sea, will make Europe too dependent on Russian energy supplies. It will also bypass Ukraine, a Western ally, potentially depriving it of valuable transit fees.

Blinken mentioned a U.S. law that required the United States to impose sanctions on companies participating in the Nord Stream 2 project, which he said "has the potential to undermine the interests of Ukraine, Poland, and a number of close partners and allies."

Blinken said he will warn his German counterpart Heiko Maas of possible sanctions at their first face-to-face meeting on March 23.

So far, Washington has only imposed sanctions on the Russian company KVT-RUS, which operates the pipe-laying vessel Fortuna. These measures were announced by the administration of U.S. President Donald Trump shortly before the end of its term in January.

The pipeline is already around 95 percent completed, and could be finished by September, according to experts.

Supporters of the gas pipeline have long accused the United States of undermining the project in order to increase sales of their liquefied gas in Europe.rferl