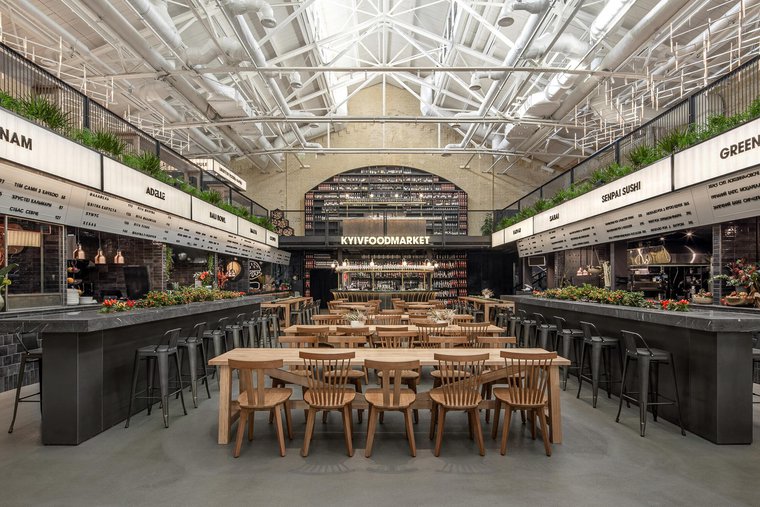 A 19th century church in San Francisco had stood semi-abandoned for nearly 30 years before it recently reopened as an event hall. It was neglected and now it stuns with its beauty: a pipe organ under a high ceiling, massive arches and sofas in the aisles.
Such a transformation wouldn’t be possible without Ukrainian architecture and interior design studio Balbek Bureau, which redesigned the Our Lady of Guadalupe Church into a modern venue.

The church had been a place of worship since 1880, but the number of attendants was decreasing year after year and the church eventually closed in 1990. For the last 20 years, its semi-basement was used as school premises.

Now the church has been transformed into a modern event hall with a co-living and an educational center in a single complex.

Slava Balbek, founder of the bureau, says the main condition was to preserve the historical value of the place while making something new out of the church building. 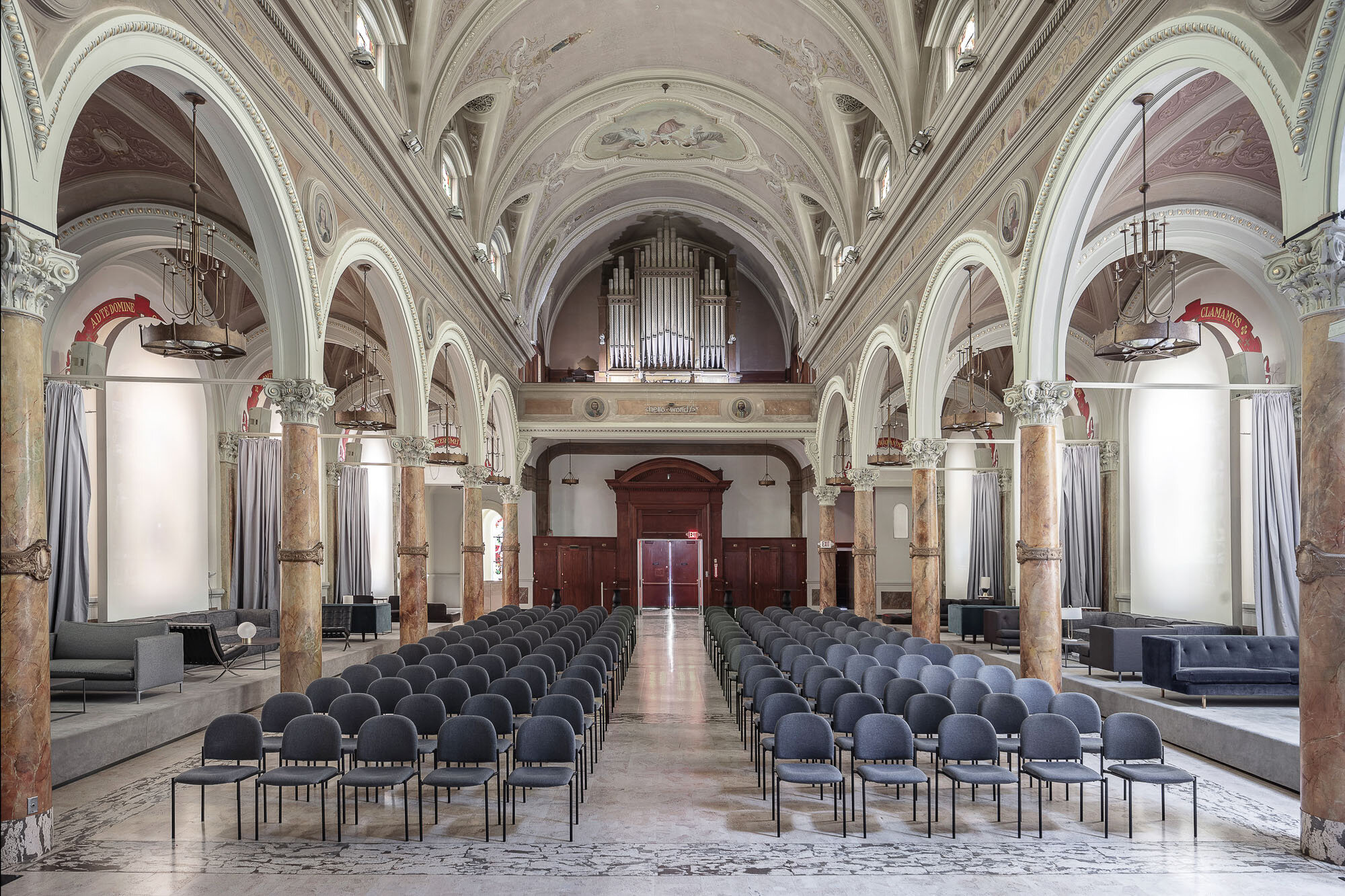 The church has become the most famous project of Balbek Bureau, but it’s only one out of over 50 that the company has designed globally.

Apart from the U.S., the company works in Ukraine, China, Britain and Russia, designing restaurants, bars, offices, hotels, stores, apartments and other spaces. Over 13 years, their designs have won or been shortlisted for 13 international awards.

Recently, they received a prestigious accolade from U. S. Interior Design Magazine in the Beauty category for their work on the Say No Mo nail bar in Kyiv.

In Ukraine, they have also designed offices for Grammarly, Banda Agency, Molodist restaurant, the Bursa Hotel, as well as their most well-known projects, the Odesa Food Market and Kyiv Food Market.

Kyiv Food Market is a signature project of the bureau in Ukraine — Balbek Bureau converted an 18th-century military arsenal into a big market that brings together over 20 bars and restaurants under its roof.

The place got so popular with locals that the President’s Office even chose it to hold Volodymyr Zelensky’s press marathon in 2019. Later, Balbek Bureau got an award for it in the commercial interior design category at the Architecture MasterPrize 2020.
Balbek, however, says his main criteria for a successful design is positive reactions from visitors. 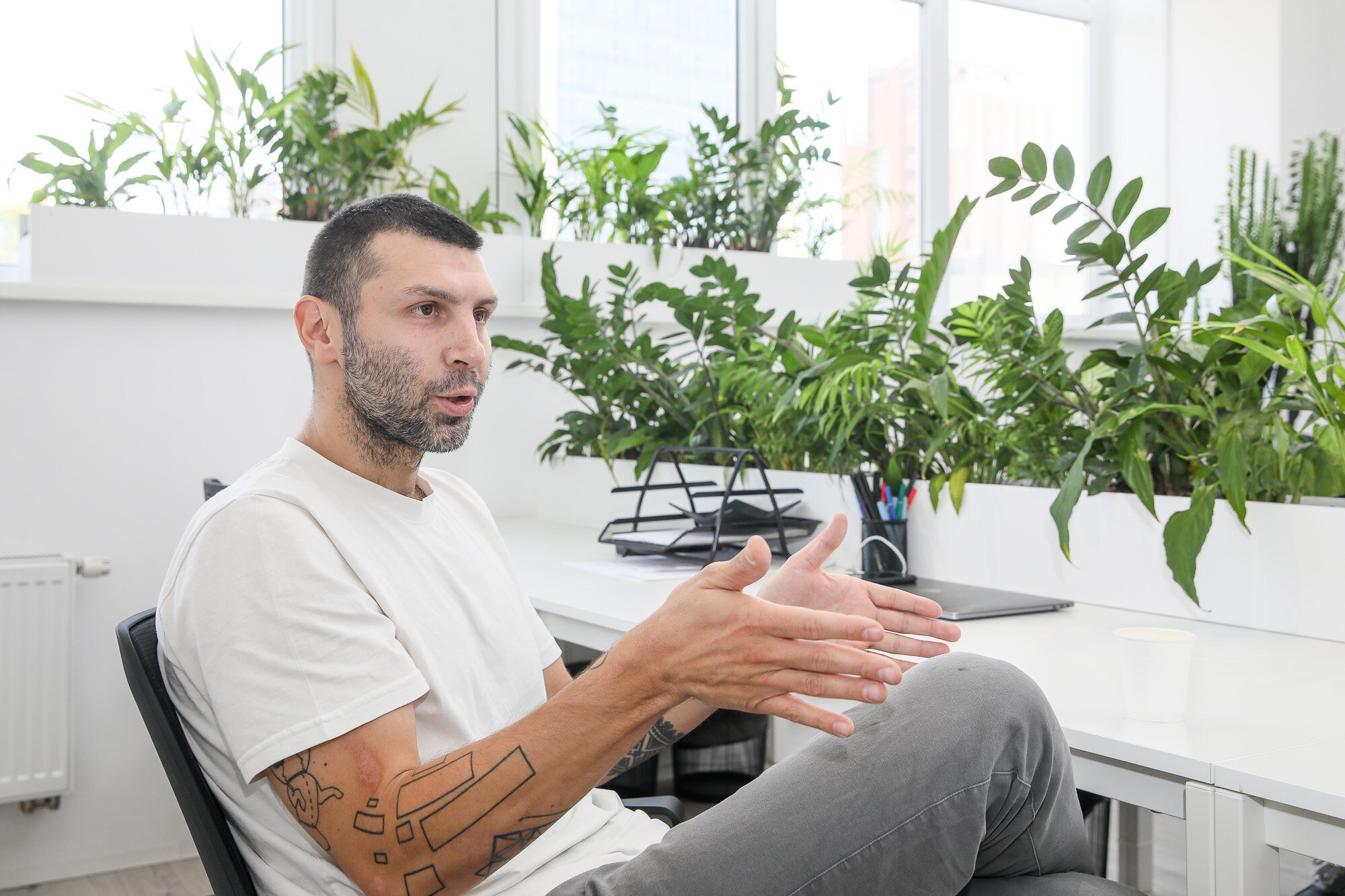 “I don’t take comments from clients who ordered the object as seriously as feedback from visitors, because the objects are made for visitors,” Balbek said, adding that he comes to places he designs to see where exactly people like to hang out.

Another locally popular project the bureau has worked on is the design of a flat in a khrushchevka, a type of a low-cost, concrete-paneled, five-story apartment building named after Soviet leader Nikita Khrushchev.

Many have criticized the apartment, but both the bureau and the client were satisfied with the result. Balbek says that, although it wasn’t their highest-level work, the bureau enjoyed working on it a great deal, since it served as a distraction.

“We made it simultaneously with projects in the U.S.,” Balbek said. It was such an (emotional) outlet.”

The bureau often comes up with offbeat decisions. In one of their designs for creative agency Banda, they installed a swimming pool (without water in it) inside the office, so that the employees could change their setting and recharge.

The company’s ability to experiment is limited by the client’s flexibility. Luckily, with Banda the sky was the limit.

“They said, ‘Of course, let’s do it. We will wear flip flops and hold meetings in flip flops,’” Balbek said. 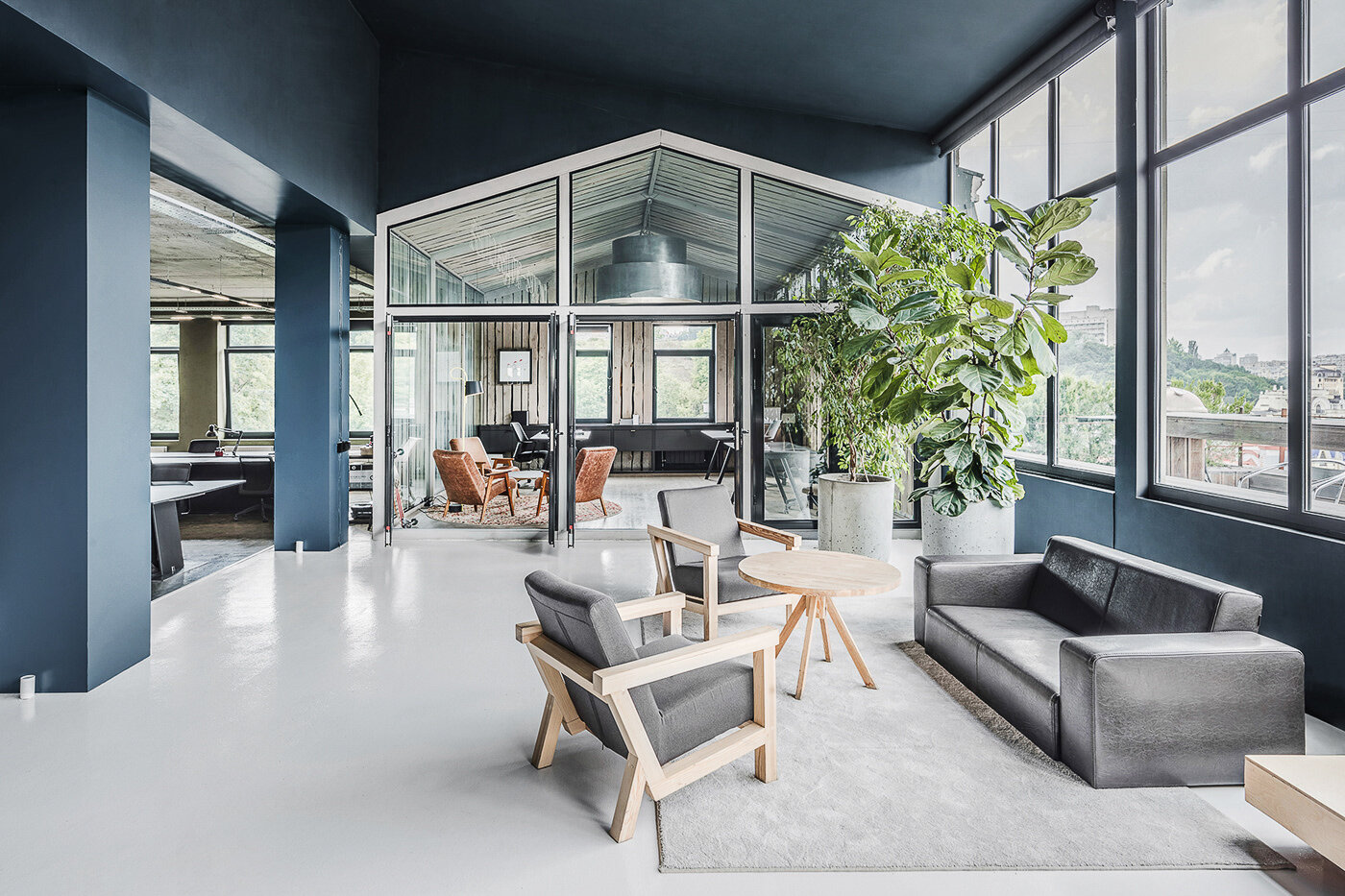 Balbek said his bureau doesn’t compete with other Ukrainian architecture and design studios because there are enough clients for each of them.

“If we all together make Ukrainian design better and of higher quality, then we aren’t competitors, we are partners,” he said.

Balbek Bureau creates architecture and interior design projects both for big and small spaces, but the company doesn’t charge their clients based solely on the area.

“We form the price based on a number of factors: the workload of our team, our interest, what we get from the point of view of aesthetics, output,” Balbek said. “We don’t design for money — we design for the result.”

One of the bureau’s main features is that its work is always minimalistic. “I’m for minimalism that verges on emptiness,” Balbek said.

Another one is that the bureau doesn’t pick projects that violate any security and inclusivity standards, as well as projects surrounded by scandals or politics.

The bureau does its best to turn all its designs into reality. “We don’t do projects on paper,” Balbek said. The only exception is their redesign of a Soviet-era building called Tarilka, or Flying Saucer.

Balbek is such a fan of Soviet modernism that his bureau, along with other specialists, including creator of the Flying Saucer Florian Yuriev, volunteered to draft the restoration plan for this Kyiv building. 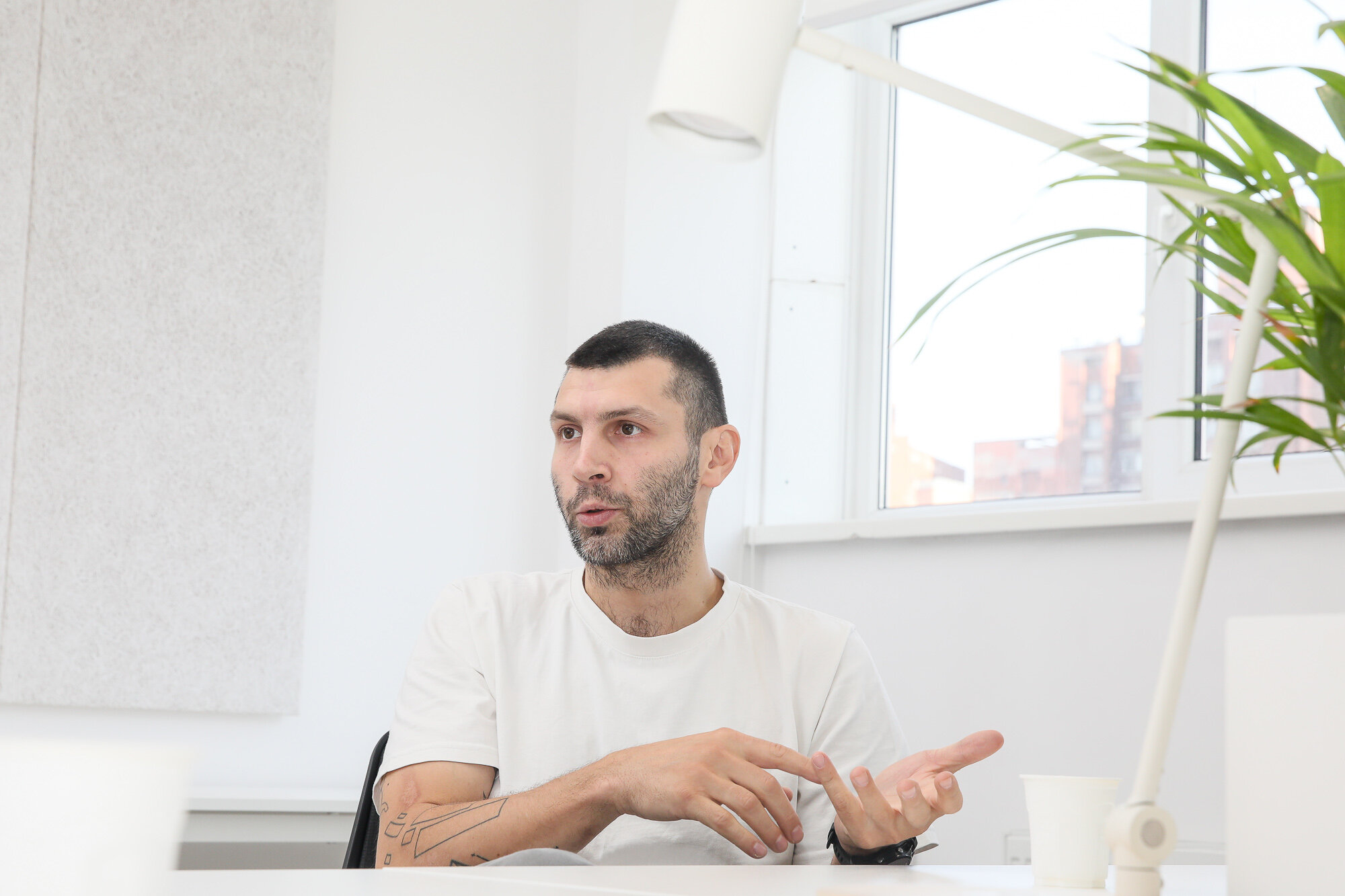 According to the project, they propose to establish an exhibition space in the building, modernize its concert hall and install illumination on the facade. The restoration is estimated at $836,000. The project has never been brought to life though, because nobody wanted to invest in it.

Simultaneously, Vagif Aliyev, owner of the Mandarin Plaza Group that rented this building for some 20 years, promised to reconstruct the Flying Saucer and create a science museum there.

However, Yuriev and the activists are concerned that the building could be reconstructed as the entrance to the new Ocean Mall looming behind it.

Recently, the Flying Saucer received the status of an architectural monument and cultural heritage object, and activists hope it will protect the Saucer from reconstruction.

Balbek says he hopes that the restoration project that his bureau made in cooperation with other activists will be brought to life.

“If someone is ever able to carry on restoring this project — no matter for political or commercial reasons — we will be happy to keep working on it,” Balbek said, adding that his bureau would do it for free.

In fact, the bureau wants to do more projects for free if they see their work can impact people’s lives.

Though advancing design in Ukraine is one of the primary goals for Balbek Bureau, the company has proved itself to be a strong player on the international arena. This year, despite the economic crisis caused by the COVID‑19 pandemic, was no exception for them.

The company created a concept for a 1,000-square-meter Darron Marketing Center in China, their first architecture project in the East Asian country, which they were developing for five months. 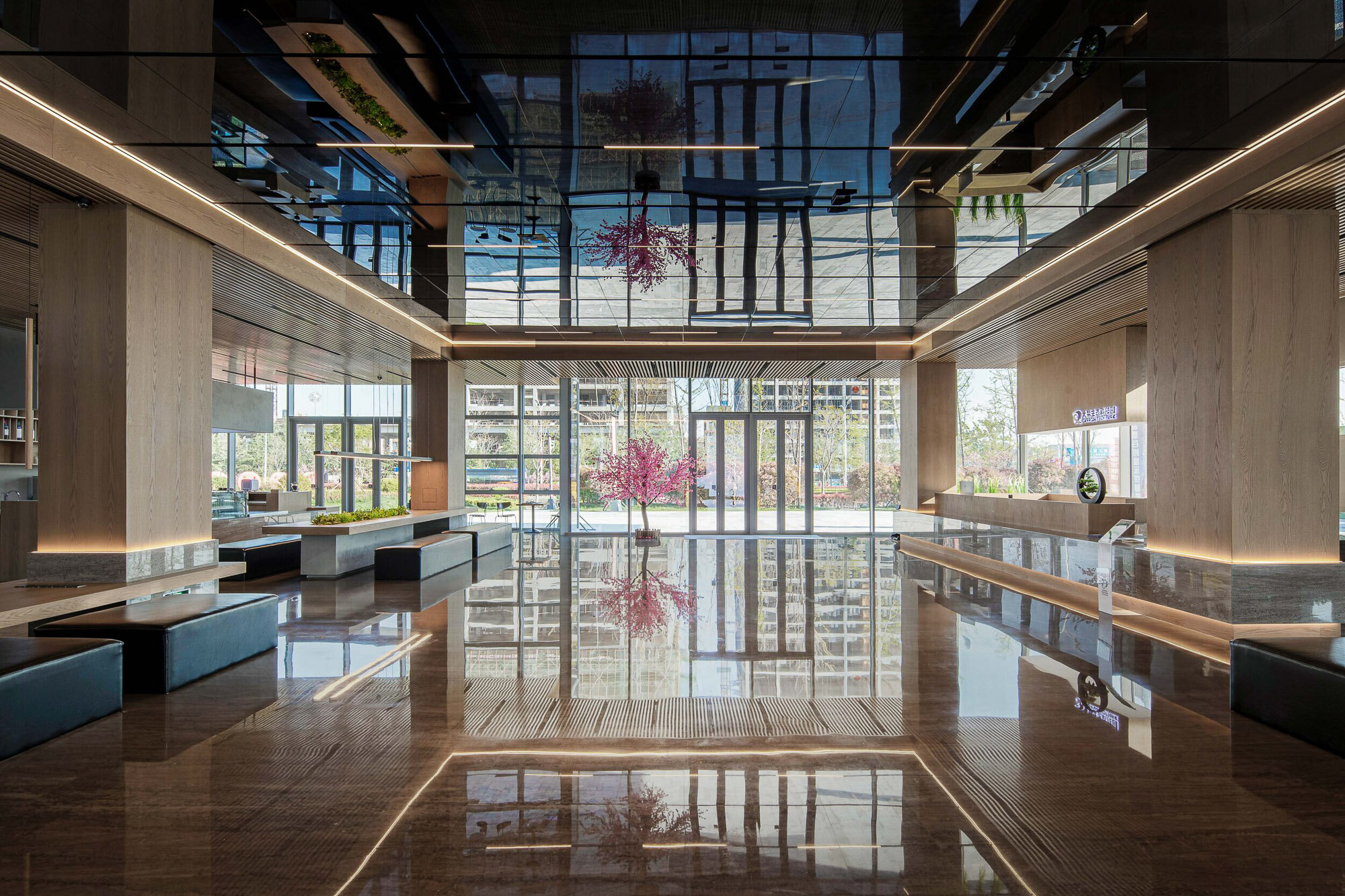 Darron is an environmental science and technology park in Qingdao, Shandong Province in China, and the marketing center is part of it. The bureau is continuing to work on another building in the park — Darron Incubation Center.

The company is also developing designs for a private club, hotel, motel and residential house in San Francisco, a city they have been doing business in for over three years.

According to Balbek, the process of designing is always different depending on the country. In Ukraine, for example, the work is faster and 10 times cheaper than in the U.S.

The bureau prefers to craft its own sofas, tables and other furniture to fit the design and keep it authentic, rather than buy ready-made products. In Ukraine, they craft 50% of the items they need. But in the U.S., such services would cost dearly for the bureau’s clients.

“When we tried to do projects in the U.S. with the same approach, we were told: ‘Guys, you are overspending.’”

Nevertheless, the Ukrainians enjoy working in the U.S. market and plan to open a branch there in 2021. It will most likely be a sales office, while the core team will remain in Kyiv.

The bureau aims to continue expanding the international market and developing designs for spaces all over the globe. And Balbek says it’s no surprise that there’s demand for a Ukrainian architectural company’s services abroad.