As Putin ramps up nuclear threats, how world reacts to ‘sham’ referendums is key: Joly 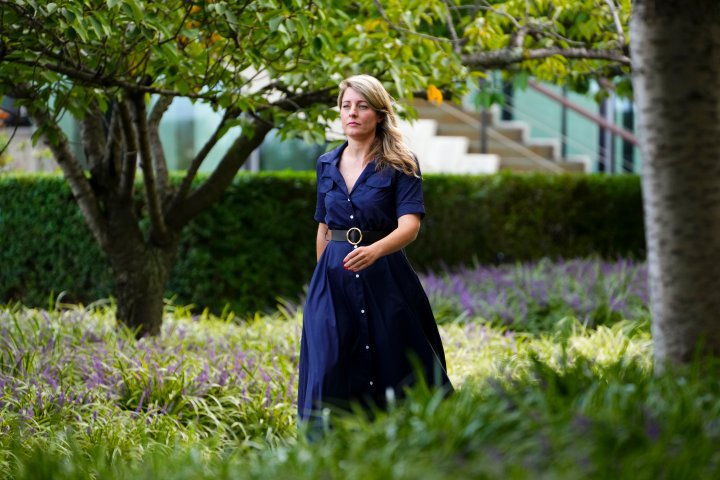 As Russian President Vladimir Putin continues to levy nuclear threats, how the world reacts to “sham” referendums taking place over the coming days in occupied regions of Ukraine will be vital for removing any “fake legitimacy” for the steps he could take next, warns Canada’s foreign minister.

Melanie Joly spoke with reporters on Thursday from New York, where she is in meetings as part of the Canadian delegation to the United Nations General Assembly. So far, world leaders at the General Assembly have focused heavily on the global instability wrought by Russia’s invasion of Ukraine, while laying the groundwork for a pushback if Putin tries to annex the Russian-controlled regions.

Claiming them as part of Russia, many fear, would provide a dangerous pretext for Putin to attempt to defend using tactical nuclear weapons to stop the continued Ukrainian counteroffensive.

Joly called the nuclear threats made by Putin amid the counteroffensive in recent days “irresponsible” and “unthinkable,” but also warned that “we can’t be naive” about the threats.

“We have to make sure that we work with allies on different scenarios. We know now that Putin is cornered. He’s cornered and he’s becoming more and more isolated,” she said.

“At the same time, we have to be very careful. We need to make sure the international community do not legitimize the sham referendum that Putin is trying to do,” Joly added.

“It is fundamental because we want to make sure Russia doesn’t have that fake legitimacy as an argument that can be used in the context of this illegal and unjustifiable war. That’s why we call it as it is – these are sham referendums and we are rallying the international community to make sure that is seen as the case.”

Joly also said more sanctions against Russia are coming “very soon” but that she did not support barring Russians from getting visas. Many are currently attempting to flee the country as Putin mobilizes additional forces to support a struggling war effort.

She said Canada is also continuing to work with other countries at the United Nations with the goal of prosecuting Putin and Russia for the crime of aggression.

NATO Secretary General Jens Stoltenberg issued a statement on behalf of the military alliance Thursday, condemning “in the strongest possible terms” the plans to hold the referendums.

He referenced the March 2022 vote by the UN General Assembly which clearly stated that no lands taken as a result of either threats or the use of force will be recognized as legal.

“Sham referenda in the Donetsk, Luhansk, Zaporizhzhia, and Kherson regions of Ukraine have no legitimacy and will be a blatant violation of the UN Charter. NATO Allies will not recognize their illegal and illegitimate annexation. These lands are Ukraine,” the statement from allies said.

“We call on all states to reject Russia’s blatant attempts at territorial conquest.”

The statement went on to condemn Putin’s “irresponsible nuclear rhetoric” and said that the choice to end the war lies with the aggressor who started it: Russia.

“Russia has it in its hands to end the conflict,” the alliance said.

“We reaffirm our unwavering support for Ukraine’s independence, sovereignty, and territorial integrity within its internationally recognized borders, and for Ukraine’s inherent right to self-defence.”

Prime Minister Justin Trudeau on Wednesday had condemned the planned referendums, which are set to be held by Russian-installed officials between Sept. 23 and 27 in Luhansk, Donetsk, Kherson and Zaporizhzhia provinces.

The regions represent about 15 per cent of Ukrainian territory.

Trudeau has said Canada will never recognize the results of the referendums, which are widely viewed as rigged. European officials have said the same.

Russian officials, meanwhile, have ramped up their rhetoric around the potential for using nuclear weapons and suggested that any attack on territory perceived as being Russian would justify any and all forms of military force.

“Encroachment onto Russian territory is a crime which allows you to use all the forces of self–defence,” Dmitry Medvedev, a former Russian president, on social media.

Margarita Simonyan, editor-in-chief of the pro-Kremlin RT TV station, wrote: “Today a referendum, tomorrow recognition as part of the Russian Federation, the day after tomorrow strikes on Russian territory become a full-fledged war between Ukraine and NATO and Russia, untying Russia’s hands in every respect.”

“I do think we could be at a turning point in Russia’s illegal invasion,” she said.

“The next step is going to be for the Russian people to understand, from Russia’s perspective, this is an entirely destructive, pointless war. And we can’t get there soon enough.”

— with files from The Associated Press.