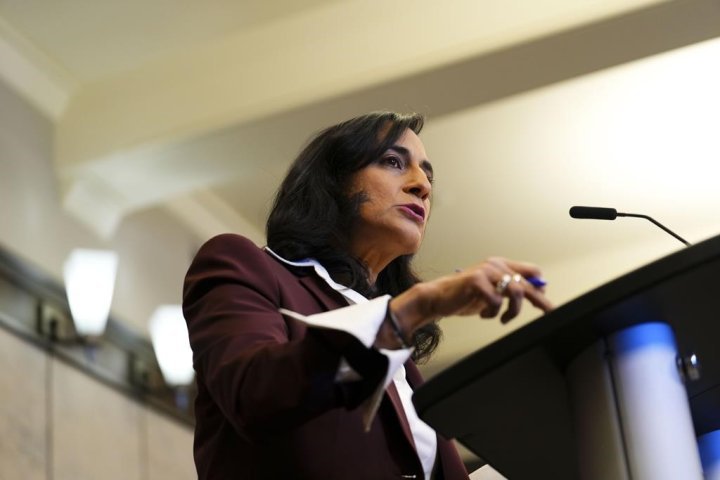 Defence Minister Anita Anand is meeting with dozens of allies at the United States’ Ramstein Air Base in Germany on Friday, where a wave of new military aid for Ukraine was being debated.

The meeting was expected to be dominated by the question of whether the allies, including Canada, will send heavy tanks that Ukraine says are needed in its fight against Russia.

Allies have been wrestling with whether to send tanks to Ukraine. Germany is facing pressure not only to send some of its Leopard 2 tanks, but to allow other countries that operate the same tanks to do the same.

That would include Canada, which has 112 Leopard 2s in several configurations in use by the Canadian Armed Forces. The tanks were acquired from Germany in 2007 during the height of the war in Afghanistan.

On Wednesday, Anand made a surprise visit to Kyiv and announced Canada is sending another 200 armoured vehicles to help with the country’s defence.

She would not say whether Canada would contribute some of its Leopard 2s if Germany allowed for their re-export, saying only that Ottawa “will continue to provide Ukraine with the aid that it needs to fight and win this war.”

She did say, however, that the request was “top of mind” for the defence ministers to discuss at their Friday meeting.

Germany has been accused of blocking the export of its Leopard 2 tanks over fears that Moscow will view such a move as a further escalation of the conflict.

Germany’s new defence minister, Boris Pistorius, told reporters on Friday that Berlin does “not fear anything,” but that it had a responsibility for the German people and Europe.

Pistorius denied that Berlin was unilaterally blocking the delivery of Leopard tanks to Ukraine, but said the government would be ready to move quickly on the issue if there was consensus among allies.

“There are good reasons for the deliveries and there are good reasons against, and in view of the entire situation of a war that has been ongoing for almost one year, all pros and cons must be weighed very carefully,” he said, adding he expected a decision would be made in the “short term.”

Washington and many western allies say the Leopards, which Germany made in the thousands during the Cold War and exported to its allies, are the only suitable option available in big enough numbers.

The United Kingdom has already increased the pressure on Germany by announcing last week it will be sending its own Challenger tanks to Ukraine along with a significant package of additional military aid.

The Kremlin said that supplying tanks to Ukraine would not help, saying the West would regret its “delusion” that Kyiv could win on the battlefield.

Speaking at the start of the meeting, Ukrainian President Volodmyr Zelenskyy thanked allies for their support, but said more was needed and more quickly.

“We have to speed up. Time must become our weapon. The Kremlin must lose,” said Zelenskyy, who earlier implied Germany was holding other countries back from sending their tanks.

“This is not a moment to slow down. It’s a time to dig deeper. The Ukrainian people are watching us,” he said, without making specific reference to tanks.

— with files from The Canadian Press and Reuters