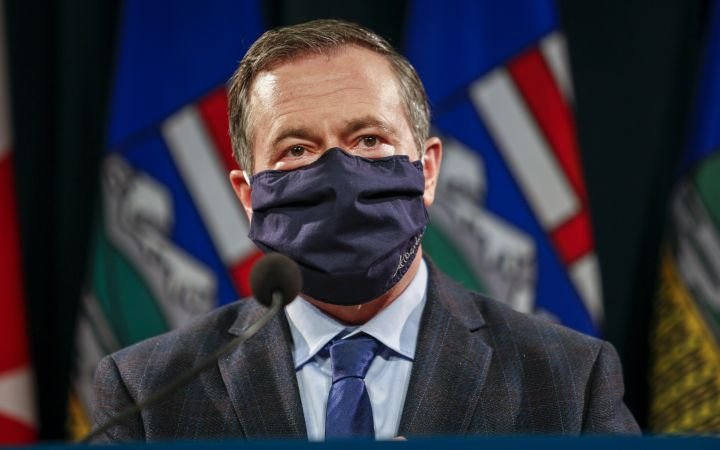 A letter from the leaders of several unions that represent health-care workers in Alberta is calling on Premier Jason Kenney to request assistance from both the military and the Red Cross as the health-care system struggles to keep up with demands placed on it by the fourth wave of the COVID-19 pandemic.

“(We) urge you in the strongest possible terms to call on the federal government to immediately deploy the military, the Red Cross and all available medical staffing resources from other provinces to assist our province’s overwhelmed hospitals,” reads the letter, dated Sept. 18.

“Our members have been going above and beyond for 19 months, but they are worried that this wave of the pandemic is the one that will crush them.”

Speaking at a news conference on Wednesday, Kenney announced his government would be implementing new COVID-19 measures, including a vaccine passport program, in an attempt to slow the spread of COVID-19 and to keep the health system from being stretched beyond its capacity.

“We may run out of staff and intensive care beds within the next 10 days,” the premier said.

“Unless we slow (virus) transmission, particularly amongst unvaccinated Albertans, we simply will not be able to provide adequate care to everyone who gets sick.”

The number of COVID-19 cases, hospitalizations and ICU admissions in Alberta has been rising dramatically in recent weeks. As of Friday afternoon, Alberta Health said the province had 19,201 active coronavirus cases and noted 911 people are in Alberta hospitals with COVID-19, 215 of which are in ICUs.

When asked to comment on the letter, Steve Buick, the press secretary for Health Minister Tyler Shandro’s office, said “the military and Red Cross would have limited ability to provide clinical resources.”

“So no requests have been made to them to date,” he wrote in an email. “If and when their assistance is needed, for example to provide equipment or logistical support such as patient transport, we’ll support requests as appropriate.”

“We’ve never seen anything like this,” McGowan told Global News on Saturday. “Heaven forbid that anybody gets in a car accident or has a heart attack.

“We decided to write this letter because, frankly, what we’ve been hearing from our own members who are on the front lines of the fourth wave. And what we’re hearing is that this is worse than we’ve ever seen in Alberta.”

Prime Minister Justin Trudeau, who is currently campaigning for re-election, said this week that his government will offer support to Alberta during the crisis, including by sending ventilators to the province.

Alberta Health Services president and CEO Dr. Verna Yiu said this week that as hospitals are stretched thin, efforts to increase surge capacity are ongoing. She said she has reached out to counterparts in other provinces to see if they are able to accommodate Alberta patients or send staff to Alberta if the situation deteriorates to a point where such action is necessary.

Since Kenney’s news conference on Wednesday, British Columbia Premier John Horgan has said his province will do what it can to help Alberta, but stopped short of offering hospital beds or staff.

Premier Kelvin Goertzen said Manitoba will send pharmaceuticals to Alberta to help with the COVID-19 situation.

In their letter Saturday, the union leaders said they believe it is Kenney’s “constitutional role as premier” to formally request help from the federal government.

“They cannot act unless you ask them to act,” the letter reads.

“So please, on behalf of our beleaguered members on the front line of this crisis, and on behalf of all Albertans, we are officially asking you to request help from the federal government.”

The letter also notes that earlier this year, military medical units were deployed to hospitals in Ontario as they grappled to keep up with patients during the pandemic’s third wave.

“The hour is late and the situation is grim,” the union leaders’ letter reads. “By itself, federal deployment of resources will not be enough to see us through. But it will help.

“The bottom line is that we need more aggressive action from your government to reduce the viral transmission that is driving this crisis.”

On Friday, Alberta Health reported that the province had identified 2,020 new cases of COVID-19 over the previous 24 hours. The government department said Alberta’s active case count was at 19,201 people Friday afternoon.

Of those, 911 were in hospital with COVID-19 and 215 were in intensive-care units because of the disease.