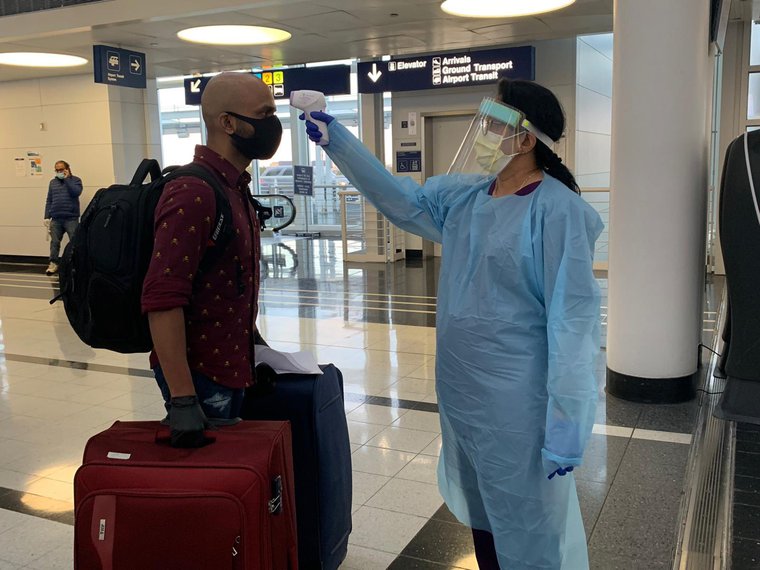 Two travellers have been fined for presenting "false or misleading" COVID-19 tests upon their return from Mexico last month, Transport Canada said today.

According to a media statement, Transport Canada conducted a "comprehensive investigation" of the two travellers and determined that they made "a false declaration about their health status." They were fined $10,000 and $7,000 respectively.

The statement says the two travellers "knowingly boarded a flight to Canada from Mexico on January 23, 2021, after having tested positive for COVID-19 only a few days before their flight."

As of Jan. 7, every traveller over the age of five is required to produce a negative test result from a polymerase chain reaction (PCR) or a reverse transcription loop-mediated isothermal amplification (RT-LAMP) test administered in the 72 hours before their flight's departure.

The tests must be conducted in the flight's country of origin before boarding the plane. Other types of tests, such as rapid antigen tests, are not accepted. The government has directed airlines to turn away travellers who do not present a test result at the time of boarding.

On Feb. 15, travellers returning to Canada via the land border were also required to supply a negative test result.

Aside from the test, travellers arriving in Canada must also submit to a mandatory 14-day quarantine period.

All travellers are also questioned by Canada Border Services Agency (CBSA) officers about their quarantine plans upon their return to the country. Border officers also screen for sick passengers and refer those who appear to be ill to Public Health Agency of Canada officials for further assessment.

Privacy concerns
Transport Canada says that "any passenger failing to comply with the interim order could be subject to fines of up to $5,000 per violation."

A Transport Canada spokesperson said one traveller was fined $5,000 for presenting a false or misleading test and another $5,000 for knowingly boarding an aircraft after having provided a false test.

The second traveller was fined $2,000 for presenting false or misleading test results and another $5,000 for knowingly boarding the aircraft under false pretences.

The spokesperson would not provide information about the relationship between the two travellers, if any, citing privacy concerns. The spokesperson confirmed they landed at Pierre-Elliot Trudeau Airport in Montreal.

The Public Health Agency of Canada was asked if it could provide details on whether the passengers went through quarantine, or if they were responsible for infecting others on the flight or once back in Canada.

A spokesperson for PHAC told CBC News that "for privacy reasons, the Public Health Agency of Canada does not comment on individual situations and specific cases."CBC