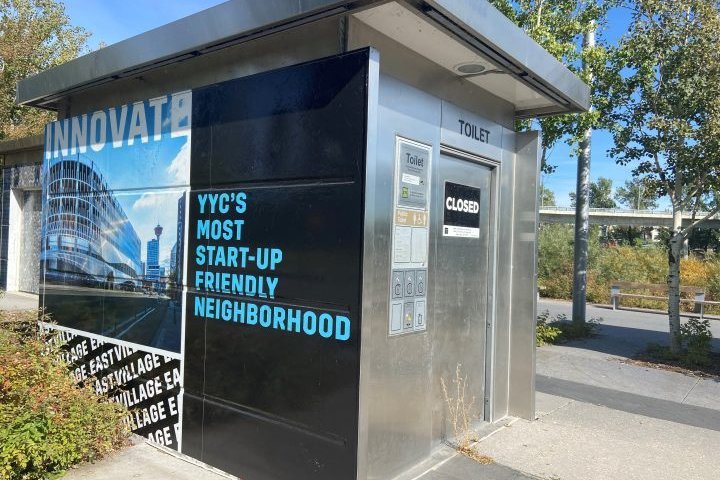 When the self-cleaning public toilets on the River Walk were first installed in 2011 they created talk because of their unique design. However, more recently that conversation has shifted to one of concern over their safety and maintenance.

“I think because of the nature of the facilities themselves, we were seeing a significant volume of social disorder, drug use and drug trafficking in and around the facilities,” said Clare LePan, a spokesperson for Calgary Municipal Land Corporation (CMLC), a subsidiary of the City of Calgary. “There were also things being flushed in the toilet that was leading to operational considerations.”

It’s those concerns that led to the closure of the bathrooms earlier this year.

Before the closure, the bathroom hours were scaled back. Now the facilities have officially been shut down, two temporary washrooms have been set up near the East Village public gardens.

LePan said these temporary toilets are of a more basic variety which hasn’t been associated with the type of maintenance and safety issues the previous ones were having — which is a relief for residents in the area who say public washrooms are a necessity.

“The temporary location seems fine. It’s a little more out of the way off the main River Walk, so maybe (they’re) not as visible,” said resident Tom Jenson. “I think there’s a fair demand for it. People along the River Walk — whether you live here or are you just passing by — it’s a nice thing to have available.”

“I think it’s just been a balance between communicating where the washrooms are and encouraging people to use them,” added LePan on the location of the temporary washrooms. “Most of the bathrooms in the East Village that are located in private businesses are just for customers, so it’s important that the bathrooms continue to be adjacent to the regional pathway, which is where we see a large number of visitors using them.”

Building the new bathrooms will cost $800,000 and will see a jury made up of community and architectural representatives overseeing the project, which is currently in the design phase.

“The design competition is underway right now,” LePan said. “We expect we would have a successful proponent selected by the end of this year.”

The new East Village bathrooms should be ready by 2023.

Chaz Smith is a homeless rights advocate. He said more public bathrooms like the ones that were just shut down are needed throughout Calgary to better serve the city’s vulnerable population.

“By limiting that washroom access we are encouraging public urination and things like that,” said Smith, who is the president, CEO and founder of BeTheChangeYYC.

“For some, it’s a way to brush your teeth or access water for your water bottle. We know that public access to washrooms within businesses can be quite challenging for folks experiencing homelessness. They are often targeted as unwanted guests.

“It’s very unfortunate because when you’re not able to have access to a shower regularly or to do your laundry regularly, it makes it difficult to access those washrooms in businesses when you are looked at as someone that is unwelcomed in that space.”

Smith added that a lack of accessible washrooms in Calgary has been an ongoing challenge for many years.

After the closure of the self-cleaning washrooms in East Village, the only city-owned automated public washroom are in Tomkins Park on 17 Avenue — which cost $50,000 a year to operate.

A city spokesperson said there are no plans to add additional automated washrooms at this time.